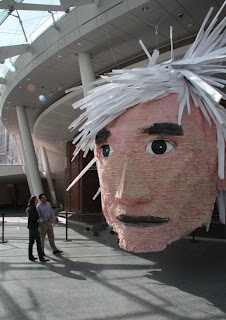 The Brooklyn Museum will celebrate the major exhibition American High Style: Fashioning a National Collection and the landmark collection-sharing partnership between Brooklyn and the Metropolitan Museum of Art at its annual gala, the Brooklyn Ball, on Thursday evening, April 22, 2010.

This year’s Brooklyn Ball will feature a giant twenty-foot-tall pinata in the shape of Andy Warhol’s head, which is part an interactive dining experience designed by Jennifer Rubell titled &#8220Icons.&#8221 The pinata is currently on view in the Museum’s Rubin Pavilion.

The Brooklyn Museum’s groundbreaking collection-sharing partnership with the Metropolitan Museum of Art went in to effect in January 2009. At that time Brooklyn’s renowned costume collection of 23,500 objects, acquired over the course of a century, was transferred to the Costume Institute of the Metropolitan Museum
of Art, where it is fully integrated into the Institute’s program of exhibitions, publications, and education initiatives and remains available for exhibition at the Brooklyn Museum.

An interactive dining experience, designed by Jennifer Rubell, whom New York Times senior critic Roberta Smith credits with “laying waste to the prolonged ordeal that is the benefit dining experience,” will begin at 8 p.m. in the magnificent Beaux-Arts Court on the third floor. The interactive food journey through the Museum is titled Icons and includes drinking paintings, suspended melting cheese heads, and a larger-
than-life dessert surprise. A hybrid of performance and installation art, Rubell’s food projects deconstruct the ritual of the meal and are often of monumental scale.
During the evening, the Brooklyn Museum will honor the Andrew W. Mellon Foundation and former Mellon Program Officer Angelica Rudenstine. Donald Randel, Mellon Foundation president, will accept the Museum’s highest honor, the Augustus Graham Medal, on their behalf.

Immediately following the Ball, the Museum will host High Style: The After Party in the Martha A. and Robert S. Rubin Pavilion. The festivities will feature artists’ fashions and dancing to live music. Tickets to the Ball range from $500 to $1,500, and tables are available from $5,000 to $50,000. All tickets to the Ball include admission to High Style: The After Party. Tickets to the after party start at $75. Further information about ticket options and table purchases is available by e-mailing [email protected] or by phoning (718) 501-6423. Proceeds from the event will support the Museum’s public and education programs.

The Augustus Graham Medal is being presented to the Andrew W. Mellon Foundation in recognition of its outstanding support of the Brooklyn Museum, including funding for the survey of the costume collection and the endowment of curatorial positions at the Museum. Through the foundation’s generosity, the first complete inventory, collection review, digital photography, and cataloguing of the Museum’s holdings of approximately 23,500 American and European costumes and accessories has been completed.

More than 5,800 of the most important works are now available to scholars, students, and the public through ARTstor, an innovative online initiative of the Mellon Foundation that provides access to curated collections of art images and associated data for noncommercial, scholarly, and not-for-profit educational use.