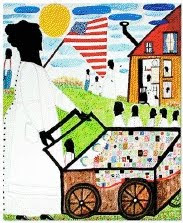 The New York Folklore Society will be presenting &#8220Textured Stories: The Works of Denise Allen&#8221 at its gallery at 113 Jay Street, Schenectady through March 26th. I asked the Folklore Society to describe Lisa’s work for us and this is what they sent:

She lived for many years in Bedford-Stuyvesant (in Brooklyn), her hometown. Her mother was a seamstress in the sense that she made a lot of the family cloths, etc. Denise, however, was not a trained seamstress. She worked as a legal secretary, and had no intention of becoming an artist. After her mother died, however, she became very depressed. She walked into a Woolworth’s store one day, saw the embroidery kits there, which reminded her of her mother, and felt &#8220called&#8221 to take that up to feel a connection with her mother. She has been doing needlework ever since.She does a unique kind of textured embroidery, not only involving needlework, but layering and adding material onto the fabric, such as wood, cardboard, wire, etc. She also creates dolls from the original design to the finishing touches. Her signatures pieces are her story cloths, textured artwork that often tells specific stories from her own life, as well as fictional stories that otherwise capture an expressive truth.

Her work focuses on themes of African-American life, particularly in the colonial period in America, and country living. She addresses themes of slavery, traditional life, life in the country, and so on.

After her son was killed in 9-11 (he worked in Tower 1), and her husband barely escaped (he worked on the 97th floor as a drafter for the Port Authority), she became extremely despondent. Because she had always been fascinated with country life after seeing a county fair event that had come to Brooklyn when she was a little girl, she and her husband decided to move up to upstate NY and live on a farm. She moved up to Palatine Bridge, and has been living there among the Amish for the past several years. She has a wonderful relationship with her neighbors, some of whom contribute wooden frames for her art. She has been working on a 9-11 story cloth, and recently completed it. It is now under consideration to be placed at the 9-11 Museum that is scheduled to be completed in 2012.