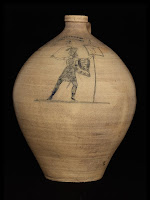 “It’s a prime example of American folk art, probably one of the best collections of decorated stoneware in the country,” is how John Scherer, Historian Emeritus of the New York State Museum characterized the Weitsman Stoneware Collection. The over 200-piece collection was donated to the museum by Adam J. Weitsman, one of the leading collectors of 18th and 19th Century stoneware.

Forty unique vessels from the collection titled Art for the People: Decorated Stoneware from the Weitsman Collection are currently on exhibit at the Albany museum’s New York Metropolis Gallery. The show was recently extended due to popular demand through the summer of 2010. “We are delighted with this collection. It attracts a lot of visitors to the museum. They are very, very impressed and almost overwhelmed by the quality of the collection,” said Scherer.

After the exhibition, it will become a permanent part of the New York State Museum. The collection is also the subject of a color, coffee-table format book being published by the museum that will be released this spring. The book is being funded by the generosity of Mr. Weitsman.

“We had a few important pieces of stoneware, but nowhere near the quality that Adam donated. The Weitsman Collection is supreme,” said Scherer.

Adam Weitsman collected his first piece of stoneware in 1980 at age 11 and the experience sparked his passion for the genre. Since then he acquired rare pieces at antique shows, estate sales and auctions. One example was a water cooler decorated with a portrait of a Civil War general and his wife. He purchased it at auction for $88,000 which set a record price for American stoneware at the time.

In 1996, Weitsman donated 100 pieces to the museum to ensure his collection would be preserved. From those and pieces acquired subsequently, 40 were carefully selected for the current exhibition. Most have never been publicly displayed.

Stoneware was vitally important to the development of New York State and its central role in western expansion of the country via the Hudson River, the Erie Canal and its network of feeder canals, and through the Great Lakes to the western river systems. Stoneware was in high demand for storage and preservation for things like drinking water, milk, butter, eggs, beer, ale, whisky, pickles and salted meat. Clay deposits ideal for making stoneware were found in what is now South Amboy, New Jersey, lower Manhattan and eastern Long Island. As a result, New York State became a large stoneware producer.

Potters sprang up along the Hudson River and throughout the New York State canal system making vessels of various shapes and sizes. During kiln firing, salt was applied to vessels that combined with clay silica to create a smooth, lustrous finish. Chocolate brown Albany Slip, named for where the clay was mined, was used to coat the insides of vessels. To identify or decorate the vessel, a painter applied a metallic oxide clay slip that turned a rich blue when fired. Sometimes manganese that turned purplish-brown was used. Simple identification included the makers’ mark and the vessel’s capacity. Elaborate designs and highly creative illustrations such as those found in the Weitsman Collection represent the sublime expression of this folk art period.

Historically significant of examples of stoneware from the Weitsman Collection include:

A Jar made by Paul Cushman of Albany in 1809&#8211Weitsman acquired it from the personal collection of PBS’ Antique Road Show host Leigh Keno.

A Jug created by William Lundy & Co. of Troy, New York in the 1820s that depicts cobalt blue caricature of a merman, a male version of mermaid.

Crocks displaying a prancing zebra and a camel were inspired by the traveling circuses of the era.

A Jug displaying a fisherman with a pole on a lake signed Nathan Clark, Lyons, NY.

A Crock decorated with a Dutch or German-style church with a gambrel roof and round tower and a weather cock, signed W. A. Maquoid, Little West 12th Street, New York City.

A two-gallon crock made by Charles W. Braun of Buffalo around 1870 is decorated with what appears to be a caricature of Buffalo Bill.

A humorous long-necked gooney bird on a six-gallon water cooler made by M. Woodruff of Cortland, New York around 1860. It was acquired from the collection of Donald Shelley, former director of the Henry Ford Museum.

A highly decorated five-gallon water cooler came from the famous George S. McKearin Collection. It was created by Julius and Edward Norton of Bennington, Vermont and shows three types of decoration commonly associated with potters at Bennington, Troy and Fort Edward, New York.

One of the rarest is a six-gallon crock made by Nathan Clark & Co. of Rochester, New York in about 1845. Decorated with the mythical phoenix firebird, it was rendered in such detail that it has a three-dimensional quality.

“I emphasized to Adam how important his collection was and how important it is to New York State. He not only donated it, but also acquires new pieces every year to add to it which is wonderful for us,” Scherer concluded.

While not engaged in collecting stoneware and fine art, Mr. Weitsman is busy with his other passion as President of Upstate Shredding LLC. With numerous locations, Upstate is the largest privately owned metal processing and recycling operation on the East Coast.

Photo: Two-Gallon Jug, (c. 1815) by Israel Seymour (1784-1852) of Troy, New York. The finely incised figure of an American Indian decorates this early ovoid jug. He carries a sword in one hand and a banner with the letter T (for temperance) in the other. Some intricately decorated stoneware pieces commemorate special events and historical figures. The Indian is believed to be Handsome Lake (c. 1734-1815), the Seneca religious prophet who in 1799 began to tell his people to refrain from drinking and doing evil.