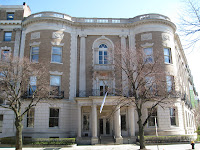 For more information about the Society’s research fellowships visit their web site at
www.masshist.org/fellowships or contact Conrad E. Wright at [email protected] or 617-646-0512.