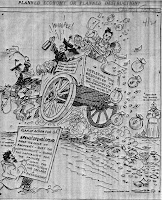 With unemployment soaring and many of the nation’s banks in uncertain straits, a newly elected President adopts the activist agenda of “wooly-headed professors” and soon is being bitterly accused of seeking dictatorial power.

This scenario, which has its uncanny echoes in today’s political scene, was played out beginning in 1932 by Franklin Delano Roosevelt and the circle of Columbia University scholars who became his close advisors. The story of this epoch-making alliance between the White House and academia is told in the New-York Historical Society exhibition FDR’s Brain Trust, on view now through March 1, 2010.

&#8220No President in the past century took office in such difficult circumstances as did Franklin Delano Roosevelt, and no President moved ahead more quickly and forcefully,&#8221 said Dr. Louise Mirrer, President and CEO of the New-York Historical Society. &#8220This new exhibition explores how Roosevelt, while still a candidate for President, did something that was unprecedented at the time and sought counsel from academics. We see how this decision led directly to the daring innovations that became known as the New Deal, and that remain with us to this day.”

Curated by Jean W. Ashton, Executive Vice President and Director of Library division, the exhibition is designed to evoke both the desperation of the Great Depression and the hope and energy of a nation rebuilding itself. FDR’s Brain Trust presents rarely seen photographs, cartoons, documents, artifacts, and newsreels drawn from the New-York Historical Society collection and the archives of Columbia University. These materials bring to life the personalities, convictions and circumstances of FDR and the people who were at first known jokingly as his “Privy Council”—Columbia University professors Raymond Moley, Adolf Berle and Rexford G. Tugwell. Dubbed “The Brains Trust” in July 1932 by a New York Times reporter—the “s” was eventually dropped—these men were eventually joined in the new Roosevelt administration by Harry Hopkins, founder of the Works Progress Administration (WPA), and Frances Perkins, who as Secretary of Labor became the first female cabinet member.

· an etching by Martin Borne titled Hooverville on Hudson (1934), showing a camp of the unemployed and homeless that would have been visible from the Columbia University campus

· a map from the Real Estate Record and Guide (March 25, 1933) showing the spread of foreclosed properties across Manhattan

Despite the vehemence that the Brain Trust aroused, the speed and scope of the New Deal they advocated were unprecedented. Less than four months after Roosevelt took office, his administration stabilized the banks and the economy, saved homes and farms from foreclosure, and began to institute a vast range of programs (including Workmen’s Compensation, a federal minimum wage, child labor laws and Social Security) to address the dire needs of Americans.