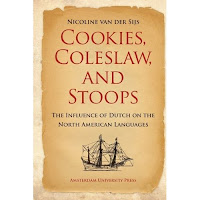 To commemorate the 400th anniversary of the Dutch arrival off the coast of Manhattan, the renowned linguist Nicoline van der Sijs along with Amsterdam University Press have published Cookies, Coleslaw, and Stoops: The Influence of Dutch on the North American Languages

From Santa Claus (after the Dutch folklore saint Sinterklaas) and his sleigh (the pronunciation of the Dutch slee is almost identical) to a dumbhead talking poppycock, the contributions of the Dutch language to American English are indelibly embedded in some of our most vernacular terms and expressions. This fascinating volume charts over 250 Dutch loan words that journeyed over the Atlantic on Henry Hudson’s ship the Halve Maan and into the American territory and languages. Each entry marks the original arrival of a particular term to American English and offers information on its evolving meaning, etymology, and regional spread.