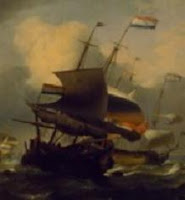 Deutsches Haus at Columbia University (420 W. 116th St., New York City) will be the location for &#8220Cities in Revolt: The Dutch-American Atlantic, ca. 1650-1815,&#8221 a conference on the relationships between the Netherlands and (mostly North) America in the long eighteenth century, that will take place November 13th and 14th, 2009. The main conference goals are 1) to create a scholarly discussion about Dutch-American interconnections in the eighteenth century and 2) help the general public gain a fuller picture of an understudied period in Dutch-American relations. Most of the conference will consist of panels of three presenters each, a comment, and time for discussion at the end.

– Paul Finkelman (Albany Law): Jews and Other Minorities in New
Netherland and Early New York: The Beginning of Religious Freedom in
America

– Martine van Ittersum (U. Dundee): Filial Piety versus Republican
Liberty? The Cornets de Groot Family in Rotterdam and the Legacy of
Hugo Grotius, 1748-1798

The Dutch Cities, Radical Enlightenment and the ‘General Revolution,’
1776-1790

– Christian Koot (Towson): Looking Beyond Sugar: Dutch Trade,
Barbados, and the Making of the English Empire

– Wyger Velema (U. A’dam): The Reception of Classical Sources in Dutch
and American Republicanism

– Joris Oddens (U. A’dam): No Extended Sphere: Gerhard Dumbar and the
Batavian Understanding of the American Constitution