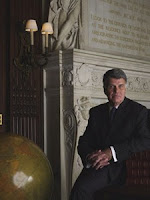 The New York Public Library is congratulating their colleague David S. Ferriero, Andrew W. Mellon Director of the New York Public Libraries, for his selection by President Obama as the next Archivist of the United States, National Archives and Records Administration. Mr. Ferriero, 63, served previously as the Rita DiGiallonardo Holloway University Librarian and Vice Provost for Library Affairs at Duke University.

&#8220David Ferriero is an outstanding librarian and manager who has made huge and lasting contributions to The New York Public Library,&#8221 said Catherine C. Marron, Chairman of The New York Public Library’s Board of Trustees. &#8220Just as he will leave a legacy of improved and enhanced services for New Yorkers, the entire country will benefit from his experience and wisdom. I congratulate David on this exciting and impressive achievement and wish him nothing but success in his new role.&#8221

The New York Public Library was created in 1895 with the consolidation of the private libraries of John Jacob Astor and James Lenox with the Samuel Jones Tilden Trust. The Library provides free and open access to its physical and electronic collections and information, as well as to its services. Its renowned research collections are located in the Stephen A. Schwarzman Building at Fifth Avenue and 42nd Street- The New York Public Library for the Performing Arts at Lincoln Center- the Schomburg Center for Research in Black Culture in Harlem- and the Science, Industry and Business Library at 34th Street and Madison Avenue. Eighty-seven branch libraries provide access to circulating collections and a wide range of other services in neighborhoods throughout the Bronx, Manhattan, and Staten Island. Research and circulating collections combined total more than 50 million items. In addition, each year the Library presents thousands of exhibitions and public programs, which include classes in technology, literacy, and English for speakers of other languages. The New York Public Library serves more than 17 million patrons who come through its doors annually- the Library’s website, www.nypl.org, receives 25 million visits annually from users in more than 200 countries.