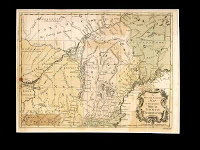 Adirondack Museum Librarian Jerry Pepper will present an illustrated presentation entitled &#8220When Men and Mountain Meet: Mapping the Adirondacks&#8221 at the Adirondack Museum at Blue Mountain Lake on Monday, August 10, 2009. Part of the museum’s Monday Evening Lecture series, the presentation will be held in the Auditorium at 7:30 p.m. There is no charge for museum members. Admission is $5.00 for non-members.

A contested terrain amid warring nations, a frontier rich in timber and minerals, a recreational and artistic paradise and a pioneering wilderness preserve, the Adirondack Mountains are an intensively mapped region. Using rare and rarely seen maps, drawn from the over 1400 historical maps and atlases in the Adirondack Museum’s collection, &#8220When Men and Mountains Meet: Mapping the Adirondacks&#8221 will chart the currents of Adirondack history, as reflected through the region’s maps.

The Adirondack Museum introduced a new exhibit in 2009, &#8220A &#8216-Wild, Unsettled Country’: Early Reflections of the Adirondacks,&#8221 that showcases paintings, maps, prints, and photographs illustrating the untamed Adirondack wilderness discovered by early cartographers, artists, and photographers. The exhibition will be on display through mid-October, 2010.

Jerry Pepper has been Director of the Library at the Adirondack Museum since 1982, he holds Master degrees in both American History and Library Science.

Photo: &#8220A New and Accurate Map of the Present War in North America,&#8221 Universal Magazine, 1757. Collection of the Adirondack Museum.