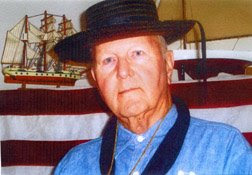 Thursday, July 16, 2009, at 6 pm, War of 1812 sailor Ned Myers will be telling his lively tale of the sinking of the Hamilton & the Scourge at the Great Lakes Seaway Trail Discovery Center in Sackets Harbor, N.Y. To be completely accurate, an authentically costumed James H. Fischer will relate the story of the famous shipwrecks’ survivor in this presentation for the 2009 Great Lakes Seaway Trail Experience Series. Fischer’s presentation will also include a series of Jacques Cousteau slides of lake bottom vessels.


Seaman Myers lived to tell his story to noted American author James Fenimore Cooper. Fischer, a marine consultant who has studied the underwater history of Lake Ontario for 22 years, draws on Myers’ narrative as told to Cooper for A Life Before the Mast. Fischer shares fascinating details of the moments before a squall surprised captain and crew.

The wrecks of the two merchant ships &#8211 Hamilton, built as Diana in Oswego, NY, and the Scourge, originally Lord Nelson, were discovered in 1973 and are considered to have national historic significance to both the U.S. and Canada.

Photo: James H. Fischer in 19th century sailor’s dress is seen below the bust of U.S. merchant ship Diana purchased in Oswego and converted in Sacketts Harbour in 1812 as the US naval warship Hamilton.