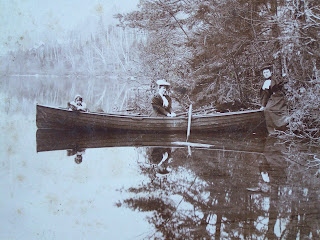 The Adirondack Museum at Blue Mountain Lake, NY &#8211 known for its superb boat collection &#8211 will offer a special program entitled &#8220Boats and Boating in the Adirondacks&#8221 this Thursday, May 7, 2009. The illustrated talk by museum Curator Hallie E. Bond, will tell the unique Adirondack story of boats, drawing on the rich collections of artifacts, documents, and historic photographs at the Adirondack Museum.

The presentation will be held in the auditorium of The Harley School at 1981 Clover Street, Rochester, N.Y., and will begin at 7:30 p.m. The program will be offered at no charge to members of the Adirondack Museum- admission will be $5 for non-members. For additional information please call (518) 352-7311, ext. 129 or visit www.adirondackmuseum.org

The Adirondack Museum’s boat collection currently numbers more than 200, a reflection of the importance of waterways for transportation in the region. Seventy-two examples of the guideboat, the watercraft indigenous to the Adirondack
region, are represented.

The Adirondack region has 2,300 lakes and ponds and 1,200 miles of rivers fed by more than 30,000 miles of brooks and streams. Waterways were once not only the preferred paths from place to place, they were often the only way to get about. The guideboat was &#8220the pickup truck&#8221 of the Adirondacks.

From birch barks and dugouts to canoes, guideboats, steamboats, and gasoline powered racing boats, Bond will describe regional craft in the context of the people who made and used them.