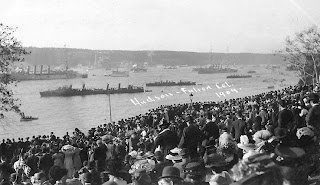 Beginning June 6, historic vessels and modern day boats will travel the Hudson River from New York Harbor to Albany for &#8220River Day&#8221 Commemorating the Voyage of Henry Hudson 400 Years Ago. In 1609, Henry Hudson and his ship, the Half Moon, with a crew of Dutch and English sailors, ventured up the Hudson River from New York Harbor to near present day Albany, the first recorded European exploration of the river that now bears his name. In celebration of this historic event, the New York State Hudson-Fulton-Champlain Quadricentennial Office will launch a &#8220River Day&#8221 celebration, an opportunity for thousands of recreational boaters and history buffs to gather on the water for an eight-day journey up the Hudson River.

* The Half Moon, a replica of Hudson’s ship.

* Historic Tall Ships including the Sloop Clearwater and Schooner Mystic Whaler plus the Woody Guthrie, a wooden replica of an 18th-19th century Hudson River Ferry Sloop- the 1890&#8242-s-style pilot Schooner Adirondack- the Manhattan, an open boat originally built as a life boat to explore the canals of Amsterdam- and the Shearwater, a classic Maine Schooner.

* Escort from the sky &#8211 historic bi-planes will escort the flotilla from the Rhinebeck Aerodrome.

The River Day celebration will launch Saturday, June 6, 9 a.m. at the Statue of Liberty. The flotilla will spend eight days moving north on the Hudson, with stops scheduled at participating yacht clubs & marinas, cities and communities with special events & educational programs planned at each port. The tentative schedule is available at http://www.exploreny400.com/riverday.aspx