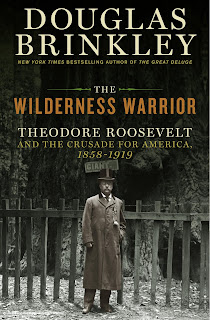 In his new book, The Wilderness Warrior: Theodore Roosevelt and the Crusade for America

Roosevelt was a pioneer of the conservation movement and was involved with the American Museum of Natural History from childhood. As a matter of fact, the original charter creating the Museum was signed in his family home in 1869, and the Museum has a permanent hall in tribute to Theodore Roosevelt and the contributions he made to city, state, and nation throughout his life. A book signing will follow this program.

Douglas Brinkley, Professor of History and Baker Institute Fellow, Rice University, is the author of several books, including The Unfinished Presidency, The Boys of Pointe du Hoc, and The Great Deluge (which won him the 2007 Robert F. Kennedy Book Award)- he is also a contributing editor at Vanity Fair and an in-house historian for CBS News. He has earned several honorary doctorates for his contributions to American letters and was once called the “the best of the new generation of American historians” by the late historian Stephen E. Ambrose.

For questions regarding this event, please contact Antonia Santangelo at 212-769-5310 or [email protected]