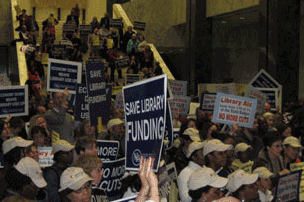 &#8220Not only are you asking us to do more with less, but you are asking libraries to help collect the very tax dollars you are taking away from us,&#8221 said Michael Borges, NYLA’s executive director. “Our members are local community libraries, not state tax collection agencies.”

The NYS Department of Taxation and Finance has discontinued mailing out forms to NYS taxpayers, and a press release and postcard sent to New Yorkers informed citizens to either visit their public libraries to pick up tax forms or download them from the internet. The move was labeled a cost cutting move, saving the Department of Taxation and Finance roughly $1 million annually. However, the cost of handling tax form distribution has been largely dumped on New York’s libraries, which are now expected to print out tax forms and provide tax-related customer service.

“Libraries are responsible for not only providing the forms, but also for helping taxpayers fill out the forms and answering other tax related questions,” said Borges. “Library traffic is up, circulation is up, and the types of library services in high-demand continue to climb while our state funding is getting cut. Adding tax form services simply shifts the costs and administrative burdens from state agencies to local libraries, and we are in no position to accept these unfunded mandates.”

“In recent years we have had hundreds of state and Federal forms given to us by the state and picked up by local residents. There is absolutely no way that we could afford to absorb the printing costs if we are forced to provide these forms entirely on our own” said Kevin Gallagher of the Middletown Thrall Library. “Imagine the cost of hundreds of tax forms, considering our budget is already being cut. It’s just not feasible.”

”I don’t mind providing this service, as I consider anything which brings more people into the library, and which increases our value to the community, to be an asset. But, certainly, it is incongruous for the state to cut library funding while it is savings millions itself by shifting its responsibilities to the very libraries it is cutting”, said Ed Dunscombe, Director, George Johnson Memorial Library in Endicott.

“This year we have spent more staff time and effort on tax-related services than ever before, &#8220said Barbara Nichols Randall, Director of the Guilderland Public Library, “We have a long standing partnership with AARP to help people in our community prepare their taxes but the mandate that local libraries replace the state in providing tax forms to the public is an added cost for the library itself. In January alone, our estimated staff cost for this service is almost $2,500, not to mention the overhead expense incurred by using our copiers and paper supplies to print the forms.&#8221

“It’s a service we provide happily, but it takes staff away from serving patrons’ other reference needs and is having an impact on our supply budget,” added Mrs. Randall. &#8220This year we estimated that we will save the community $42,000 with this service.&#8221

About NYLA: The New York Library Association &#8212- America’s first state library association &#8212- was founded in 1890 to lead in the development, promotion and improvement of library and information services and the profession of librarianship to enhance learning, quality of life, and equal opportunity for all New Yorkers. Today, NYLA is working stronger than ever to promote its mission of supporting libraries and information services.