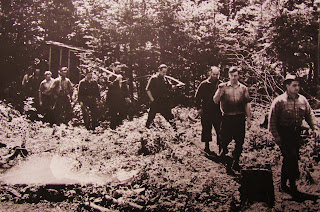 This post has been cross-posted to Adirondack Almanack, the blog of Adirondack culture, history, and politics.

In the heart of the Adirondacks is the Town of Newcomb, population about 500. The town was developed as a lumbering and mining community &#8211 today tourism and forest and wood products are the dominate way locals make a living. As a result the Essex County town is one of the Adirondacks’ poorer communities ($32,639 median income in 2000).

The folks in Newcomb (and also in North Creek in Warren County) often promote their communities’ connection to Theodore Roosevelt’s ascendancy to the presidency. Teddy’s nighttime trip from a camp in Newcomb to the rail station at North Creek as William McKinley lay dying from a bullet delivered by Leon Czolgosz&#8216-s .32 caliber Iver-Johnson handgun is usually considered Roosevelt’s great tie to the Adirondack region. There is a annual celebration of Roosevelt this weekend, but more of that later.

Roosevelt was the first American president to find the long-term conservation of our natural resources and important goal. According to the great wiki &#8220Roosevelt set aside more land for national parks and nature preserves than all of his predecessors combined, 194 million acres&#8221:

Roosevelt created the first National Bird Preserve, (the beginning of the Wildlife Refuge system)&#8230- recognized the imminent extinction of the American Bison&#8230- urged Congress to establish the United States Forest Service (1905), to manage government forest lands, and he appointed Gifford Pinchot to head the service&#8230- In all, by 1909, the Roosevelt administration had created an unprecedented 42 million acres (170,000 km?) of national forests, 53 national wildlife refuges and 18 areas of &#8220special interest&#8221, including the Grand Canyon.

A longstanding question from Roosevelt’s time still creates raging debates in Newcomb &#8211 should the state keep buying land in Newcomb (and elsewhere) to add to the Forest Preserve while it continues to ban logging?

Here is a short history of the movement to log the Adirondack Forest Preserve prior to 1900:

1798 &#8211 New York State sells 4 million acres of the Macomb Patent for eight pence an acre. Political and corporate interests would control much of the Adirondacks for the next century. In 1855 for example, the state sold three entire townships to a railroad company for five cents an acre, even though the price had been set by law at 75 cents an acre.

In 1885, the Forest Preserve Act was passed establishing the New York State Forest Commission and declaring that &#8220The lands now or hereafter constituting the forest preserve shall be forever kept as wild forest lands. They shall not sold, nor shall they be leased or taken by any corporation, public or private.&#8221

With the establishment of the Forest Preserve came calls to log it. In 1890, the Commission argued that new Forest Preserve lands should be purchased with money from the sales of timber (softwoods over 12 inches in diameter). In 1892, the state legislature established the Adirondack Park within the Forest Preserve and stated it would be &#8220forever reserved, maintained and cared for as a ground open for the free use of all the people for their health or pleasure, and as forest lands necessary to the preservation of the headwaters of the chief rivers and a future timber supply.&#8221

The move to log the Forest Preserve created a backlash from conservationists and that, along with a report form the State Comptroller outlining immense fraud, bribery, and illegal cutting, led to inclusion of a formal ban in the New York Constitution in 1894. &#8220The lands of the state, now owned or hereafter acquired, constituting the forest preserve as now fixed by law, shall be forever kept as wild forest lands. They shall not be leased, sold or exchanged, or be taken by any corporation, public or private, nor shall the timber thereon be sold, removed or destroyed.&#8221 The American Forestry Association also opposed this plan.

In 1898, New York Governor Frank Black, pushed for a 40,000 acre experimental forestry station to be run by Cornell Forest School, which was established by the same law. Cornell University started the forestry program but closed its doors in 1903, it was headed by Bernhard Eduard Fernow.

In 1898 Teddy Roosevelt was elected Governor. Roosevelt believed that someday, forestry could be applied to the state’s Forest Preserve &#8211 he said so in his 1900 annual message: &#8220We need to have our system of forestry gradually developed and conducted along scientific principles. When this has been done it will be possible to allow marketable lumber to be cut everywhere without damage to the forests.&#8221

Roosevelt brought in Gifford Pinchot and the United States Division of Forestry who devised a plan to lumber Township 40 in the Totten and Crossfield Purchase. About 25 men were hired under forester Ralph Hosmer and local lumberer Eugene Bruce to survey the woods and lay out a plan to log the Forest Preserve. With the failure of the plan’s adoption came the virtual end to serious attempts to log the Adirondacks en masse.

The annual Newcomb Roosevelt celebration is this weekend (Sept. 5, 6, and 7)

One thought on “Teddy Roosevelt and The Adirondack Forest Preserve”