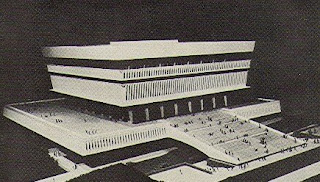 Capital News 9 is reporting that former state employee Daniel Lorello is expected to plead guilty today in Albany County Court. He was arrested for stealing hundreds of documents from the New York State Library and selling them on eBay.

Lorello was an archivist in the Education Department’s Office of Cultural Education. He was arrested in January after an investigation led by Attorney General Andrew Cuomo found about 200 state documents [sic: actually it was a lot more than that, read on] had been stolen for profit.

Among the items Lorello is accused of stealing is a letter written in 1823 by Vice President John Calhoun.

Officials said history buff Joseph Romito, a lawyer from Virginia, alerted state authorities after seeing some of the historic documents being sold on eBay.

A piece from earlier this year in the Albany Times Union fills-in more of the picture:

He was thwarted after he tried to sell an 1823 letter from Vice President John C. Calhoun to a New York general on eBay, posting it as a historical document, authorities said.

Lorello, an expert on Civil War history, coordinated a three-year plan to renovate the storage of state historical records on the 11th floor of the State Library. His duties also included acquiring new artifacts and working with researchers, said State Education spokesman Alan Ray. Ray noted that Lorello is accused of stealing items from the State Library &#8212- not the State Archives, where he was employed. The State Archives and Library, along with the State Museum, are part of New York’s Office of Cultural Education. The library alone contains more than 20 million items.

In his statement, Lorello estimated stealing 300 to 400 items in 2007 alone. He told the attorney general’s office he delivered the artifacts by way of FedEx, United Parcel Service and other shippers. Lorello accepted money orders and bank checks for the items, according to the court papers.

UPDATE: From the Schenectady Gazette this afternoon:

In Albany County Court, 54-year-old Daniel Lorello of Rensselaer admitted stealing artifacts since 1997. He faces two to six years in prison at sentencing Oct. 1. He must also pay $73,000 in restitution to buyers who later returned stolen property and forfeit seized items and his private book collection.