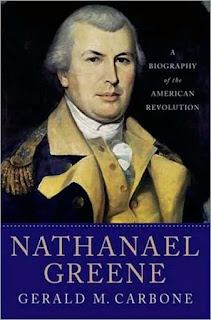 Nathanael Greene &#8211 the seemingly forgotten (yet most successful) American general of the American Revolution, is the subject of a new biography by Rhode Island journalist Gerald Carbone.

The publisher blurb for Nathanael Greene: A Biography of the American Revolution

Despite his huge military successes and tactical genius Greene’s story has a dark side. Gerald Carbone drew on 25 years of reporting and researching experience to create his chronicle of Greene’s unlikely rise to success and his fall into debt and anonymity.

Probably a former Quaker by the time of the war began, the Rhode Islander Greene is mostly remembered for his leadership of the Southern Campaign. Take it from the great Wiki:

Greene’s Southern Campaign showed remarkable strategic features. He excelled in dividing, eluding and tiring his opponent by long marches, and in actual conflict forcing the British to pay heavily for a temporary advantage- a price that they could not afford. He was greatly assisted by able subordinates, including the Polish engineer, Tadeusz Kosciuszko (recently of the Mohawk River Bridge), the brilliant cavalry officers, Henry (&#8220Light-Horse Harry&#8221) Lee and William Washington, and the partisan leaders, Thomas Sumter, Andrew Pickens, Elijah Clarke, and Francis Marion.

Greene gave us Greene County, actually fourteen of them, stretching as far west as Iowa and including our own Greene County, NY. His most popular victories came in the South, and combined with a New York tendency toward Knox, Gates, and Putnam and Greene settling in the South after the war, New Yorkers have pretty much forgotten him &#8211 how many remember that &#8220e&#8221 at the end of Greene?

Greene commanded the rebel city of Boston after it was evacuated by Howe in March 1776 but then spent a lot of time in New York during the war. He was in command of the Continental Army troops on Long Island, and commanded the construction of Fort Putnam (now Fort Greene Park, Brooklyn’s first).

He was sick during the Battle of Long Island, and made the controversial argument to evacuate New York City and destroy it’s usefulness with the torch. It will be interesting to see what Carbone’s new biography says about that.

In New Jersey, he commanded Fort Lee and Fort Washington, commanded at the battles of Trenton, Brandywine (Greene commanded the reserve), and Germantown. He became Quartermaster General in 1778 at Valley Forge (another particularly interesting point worthy of a book in itself), and led the right wing of the army at Monmouth that Spring. In August, Greene (with Lafayette) commanded the Battle of Rhode Island and led at the Battle of Springfield. He also battled with Congress over how to fund the war, and commanded West Point. In 1780 he presided over the court that sentenced Major John Andre to death.

Then he was asked to command the South.