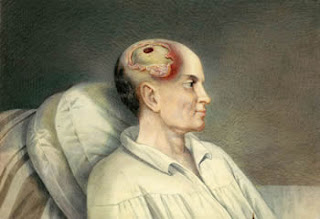 There is an outstanding post over at the blog behind AotW [Behind Antietam on the Web]. The solider at left with the head wound is Private Patrick Hughes, Fourth Regiment, New York State Volunteers, whose story is detailed by Brian Downey.

So Patrick and his mates [mostly from New York City] were still combat rookies [at the Battle of Antietam] when they crested the rise overlooking the sunken road at the far side of the Roulette Farm at about 9 in the morning of 17 September. The 4th New York were at the left front of the Division in line of battle, and were among the first to run into the concentrated fire of the North Carolina regiments of Anderson’s Brigade, hunkered down in the natural trench of that road. It was probably there that Patrick Hughes was shot.

Although dazed and in shock, bleeding heavily from the scalp, he dragged himself to the rear and received first aid from the regiment’s surgeon, Dr. George W Lovejoy, who reported his “patient was conscious and answered questions rationally.” He was then carried to a barn in Keedysville. He lay there until 20 September, when he was moved to a hospital in Hagerstown.

Brian Downey describes his blog as &#8220a companion to Antietam on the Web, to catch some of the spin-off that comes from researching, writing, and coding for that site.&#8221

Both sites are outstanding and can be found, along with a pile of other new Civil War blogs, on our blogroll at right.