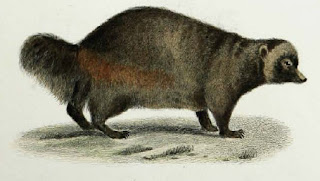 The mid-1800s Natural History Survey of New York has been posted online at the New York State Library here. According to a recent note from the Library’s staff:

The Natural History Survey of New York, undertaken in the mid-1800s, covered zoology, flora, mineralogy, geology, agriculture and paleontology. The NYS Library has digitized the first three components of the survey so far. The &#8220Zoology of New York&#8221, or the &#8220New York Fauna,&#8221 is a five-volume set published from 1842-1844. This pioneering study by James E. De Kay addressed both recent and fossil mammals, birds, reptiles, amphibians, fish, mollusks and crustaceans. The hand-colored plates in part 1 (Mammalia), part 2 (Birds) and part 5 (Mollusca and Crustacea) can be found at the end of those volumes. &#8220A Flora of the State of New-York,&#8221 a two-volume set by John Torrey, was published in 1843- at the time, it was the largest single work of its kind published. The hand-colored plates are listed after each volume. &#8220Mineralogy of New-York&#8221 by Lewis C. Beck was published in 1842 and provided detailed descriptions of minerals found in the state, with information on their uses in the arts and agriculture.

Here is a description of the Northern District from the Survey’s preface (note the presence of wolverines [photo above] &#8211 alternate spellings are in the original):

The Northern District comprises, as its name imports, the northern portion of the State, which forms an irregular truncated triangle, bounded on its western side by Lake Ontario and the River St. Lawrence, on its eastern side by Lake Champlain and Lake George, and lying north of the Mohawk valley. This district, in its southern and southeastern portions, rises into numerous conical peaks and short ranges, attaining in some places an elevation of more than five thousand feet. Towards Lakes Champlain and George, these subside suddenly to the level of those sheets of water. To the north and northwest, this descends by a gradual and almost imperceptible slope towards the River St. Lawrence. This slope is watered by the Oswegatchie, the Moose and Black rivers, the Raquet [sic] and Grass and St. Regis rivers, all arising from numerous lakes embosomed in the mountainous regions of its southern parts. Lake Champlain, a part of its eastern boundary, extends north and south one hundred and forty miles, is twelve miles wide in its broadest part, and discharges its water through the Sorel river into the St. Lawrence. Into the southern part of this lake is also poured the waters of Lake George or Horicon, thirty-seven miles long, and varying from one to seven miles in breadth. The cluster of mountains in its southeastern portions may be considered as an offset from the great Appalachian system, which, descending through the States of Maine, New-Hampshire and Vermont, passes southwesterly between the Western and Hudson river districts, and is continued under the name of the Allegany range of mountains. In this region too we find the Sacondaga, Cedar, Jessup, and other tributaries of the Hudson, within a short distance of those which pour into the St. Lawrence. This mountainous region comprises the counties of Essex, Hamilton, Herkimer and Warren, and the southern part of the counties of Clinton, Franklin and St. Lawrence, and has been estimated to contain an area of about six thousand square miles. Its zoological character is strongly impressed by the features just alluded to. The chief growth of trees in this district are the Spruce, Pine, Larch, Balsam, Fir and Cedar. We find in this district many of the fur-bearing animals, such as the Sable, the Fisher, and the Beaver. Here too roam the Moose, the Wolverine, and others now only found in high northern latitudes. It also forms the southern limits of the migration of many arctic birds- and we accordingly meet here with the Canada Jay and Spruce Grouse, the Swan, the Raven and the Arctic Woodpecker.