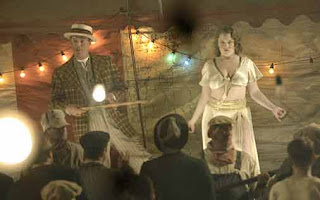 The New York City History blog The Bowery Boys has a great post on Barnum’s American Museum that includes a podcast, lots of images and a link to The City University of New York website devoted to Barnum’s, The Lost Museum. Both sites are worth checking out.

Barnum’s American Museum was located at the corner of Broadway and Ann Street in New York City from 1841 to it was destroyed by fire in 1865 [pdf of NY Times Article]. P.T. Barnum’s partner was John Scudder the original owner of the museum (then known as Scudder’s American Museum). Scudder recently found new fame as character inspiration for the HBO series Carnivale &#8211 a must see for those interested in carnies, the ballies, flying jennys, sugar shacks, the midway, and oh, the Great Depression.

Barnum opened his museum on January 1, 1842 to create a place where families could go for wholesome, affordable entertainment but his success drew from the fact that he knew how to entice an audience. Its attractions made it a combination zoo, museum, lecture hall, wax museum, theater and freak show,that was, at the same time, a central site in the development of American popular culture. At its peak, the museum was open fifteen hours a day and had as much as 15,000 visitors a day.

On July 13th, 1865, the American Museum burned to the ground in one of the most spectacular fires New York has ever seen. Animals at the museum were seen jumping from the burning building, only to be shot by police officers. Barnum tried to open another museum soon after that, but that also burned down in a mysterious fire in 1868. It was after this time that Barnum moved onto politics and the circus industry.

While we’re talking Phineas Taylor Barnum, we should point readers to Robin Freeds’ &#8220In Business for Myself: P.T. Barnum and the Management of Spectacle.&#8221

Also, the Disability History Museum has the full text of Barnum’s 1860 catalog online.

3 thoughts on “P.T. Barnums American Museum On The Web”