Richard Whitby’s career in music had blossomed, and after years of hard work, he was offered Second Chair Trombone in John Philip Sousa’s band, and First Chair upon the lead trombonist’s imminent retirement. It was a tremendous honor, and highly regarded confirmation of his great talent, but there was a problem: Richard was still under contract to Carl Edouarde, who had no intentions of releasing him from a prominent run at New York’s Palace Theater.

He continued as lead trombonist for Edouarde’s concert band, and it seemed like the opportunity of a lifetime had passed. But such was the talent of Richard Whitby that Sousa was willing to wait. When he became a free agent in 1915, Sousa signed Richard to an eight-month contract, beginning on April 1, 1915.

The timing was fortuitous. After three years of playing one main venue and going on only a short tour each season, Sousa’s band was suddenly once again a hot property. When Richard joined the orchestra, it was for an extraordinary tour reaching all the way to the West Coast.

San Francisco was hosting a major event, the Panama-Pacific International Exhibition (the World’s Fair), celebrating the opening of the Panama Canal and the city’s own recovery from the horrific 1906 earthquake. Sousa’s band played on opening-day and performed for an extended run through May and June, allowing untold thousands to enjoy Whitby’s great solos.

The band might have played longer but for a telegram from New York, requesting their services for an upcoming extravaganza at the world’s largest theater, the Hippodrome.

Leaving San Francisco, the band toured the Northwest to great acclaim. Notable was a July concert before 17,000 attendees at a high school stadium in Tacoma, Washington. From there, the band toured through the Midwest and then played before large crowds in Pennsylvania, including a month at famous Willow Grove Park and two weeks at the Pittsburgh Exhibition, before finally arriving in New York.

Those were heady days for one of the world’s most famous bands, now performing at the 5,200-seat Hippodrome for an eight-month run. Critics raved, as did Theatre Magazine: “The astonished and delighted spectator feels like cheering all the way through the really wonderful program.” It was a smash success, but Whitby remained for only half the run (about 215 performances).

When his contract with Sousa expired at the end of the year, Richard returned to more familiar haunts. In 1916, he opened with a slide trombone solo for a Warrensburg concert by students of the famed Oscar Seagle. Whitby’s rendition of &#8220Patriot Polka&#8221 was a tribute to his friend and former instructor, Arthur Pryor, author of the tune and acknowledged for decades as one of the world’s premier trombonists. 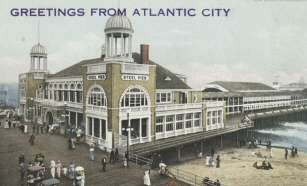 Richard’s preference was to remain in the North Country, but no matter where he was, his talent and fame kept him in high demand. A renowned soloist who tested the limits of his instrument, Whitby starred for several years on Atlantic City’s Boardwalk. The main venue he played there was the famed Steel Pier, which extends 1000 feet over the ocean and today sits directly across the Boardwalk from Trump’s Taj Mahal Resort and Casino.

He also did stints at New York’s Palace Theater, and in the 1920s was soloist with the Paramount Symphony Orchestra at the Paramount Theater.

When he was upstate, he played with Noller’s Band of Troy and the Schenectady Symphony Orchestra. Whitby lived in Albany for many years, and through the 1930s and 1940s was one of the city’s and the region’s most sought-after musicians. He was widely acknowledged as one of the greatest trombone players in the country.

Obituaries normally mention one’s accomplishments, and when Richard Whitby died in 1952, his hometown obit noted only two events: “… native of Warrensburg … died … at his home in Albany.” It suggests an innocuous existence marked largely by his entrance into and exit from life.

Being born and dying are surely significant, but as you have seen, there was some other stuff in between.