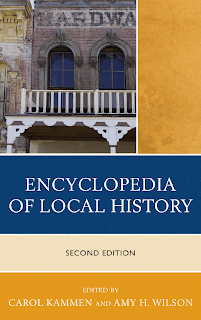 The essay on public history in the newly published second edition of the Encyclopedia of Local History, provides some fresh insights. The Encyclopedia, edited by Tompkins County Historian Carol Kammen, a long-time leader in the field, and Amy H. Wilson, an independent museum consultant and former director of the Chemung County Historical Society in Elmira, is  a rich source of fresh insights on all aspects of local history.

The essay on public history is written by Allen S. Newell, founder of Historical  Research Associates, a public history consulting firm. Public historians “employ the same methods and analytical approaches that all historians utilize,” the essay notes. They are concerned with “the way in which historical thought is communicated to various ‘publics.’” They are interested in getting the word out about how history creates insights and sheds light on current issues.

“The emphasis is on ensuring that history reaches as wide a community as possible….Public history may be characterized more as an attitude or perception about the use and value of history than as a distinct field of history,” says Newell.

Public history should be used to shed light on public issues. It needs to be part of the public debate.  That is relatively easy to do in New York, where so many contemporary issues have been debated for many years through our rich, vibrant history.

4 thoughts on “Public History and Debate of Public Issues”