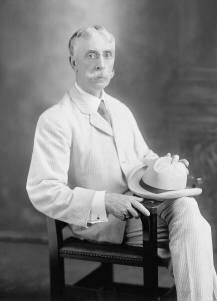 In 1847, Thomas Symons operated a book bindery in the village of Keeseville, offering ledgers, journals, receipt books, and similar products. Rebinding of materials was much in demand in those days, a service that helped expand his clientele. While Thomas, Sr., was successful in building a business, his son, Thomas, Jr., would play an important role in building a nation.

Thomas William Symons, Jr., was a Keeseville native, born there in 1849. When he was a few years old, the family moved to Flint, Michigan, where several members remained for the rest of their lives. His younger twin brothers, John and Samuel, operated Symons Brothers & Company, the second largest wholesale firm in the state. They became two of Michigan’s most prominent men in social, political, and business circles.

Thomas chose a different route, completing school and applying to the US Military Academy at West Point. After acceptance, he proved to be no ordinary student, graduating at the top of the Class of 1874. He was promoted to Second Lieutenant, Corps of Engineers, and served at Willett’s Point, about 50 miles south of West Point. After two years, he was ready for some field work, and his timing couldn’t have been better.

The engineers, Symons among them, not only explored, but recorded details of their findings. The land encompassing Arizona, California, Colorado, Nevada, and Utah was surveyed using triangulation, and more than 70 maps were created. Their studies on behalf of America’s government produced volumes on archaeology, astronomy, botany, geography, paleontology, and zoology. The possibilities of roads, railroads, agriculture, and settlement were addressed.

The experience Thomas gained during this work was invaluable. In 1878, he was promoted to First Lieutenant. In 1879, Symons was appointed Engineer Officer of the Department of the Columbia, and was promoted to captain in 1880. Similar to the work he had done under Wheeler, Thomas was now in charge of studying the area referred to as the “Inland Empire of the Pacific Northwest,” focusing on the upper Columbia River and its tributaries.

Much of the land was wilderness, and the job was not without danger. The American government was notorious for breaking treaties with Indians, and groups of surveyors in the region were driven off by angry natives who said they had never sold the rights to their land.

Symons was a surveyor, but he was also an officer of the military. Leading a company of the 21st Infantry from Portland, Oregon, into Washington, he faced off against 150 armed warriors. The situation was potentially disastrous, but Thomas listened to the concerns of the Indians, learning their histories and beliefs. Bloodshed was avoided as Symons skillfully negotiated a truce, allowing him to survey from the Snake River north to the Canadian border, unimpeded.

Much of the upper Columbia study was conducted in a small boat carrying Symons, two soldiers, and several Indians. His report provided details of the region’s geology and history, a review so thorough that it was published as a congressional document. Combined with his earlier surveys of Oregon, it made Symons the government’s number one man in the Northwest.

Whether or not his superiors agreed with him, Symons addressed the Indians’ issues in prominent magazine articles, sympathizing with their plight. Few knew the situation better than Thomas, and he freely expressed his opinions.

Besides exploring and mapping the Northwest, he chose locations for new army outposts, built roads, and carried out military duties. He also became a prominent citizen of Spokane, purchasing land from the Northern Pacific Railroad and erecting the Symons Building, a brick structure containing commercial outlets and housing units. (A third rendition of the Symons Block remains today an important historical building in downtown Spokane.)

Thomas’ proven abilities led to a number of important assignments. In 1882, he was placed on the Mississippi River Commission, taking charge of improvements on the waterway. In 1883, the Secretary of State asked Symons to lead the US side of the joint boundary commission redefining the border with Mexico. Surveying, checking and replacing border markers, and other work was conducted while averaging 30 miles per day on rough ground in intense heat. For his efforts, Thomas received formal thanks from the State Department.

He was then sent to Washington, D.C., where he worked for six years on city projects, principally the water supply, sewage system, and pavements. He also developed complete plans for a memorial bridge (honoring Lincoln and Grant) connecting Washington to Arlington, Virginia. (A modified version was built many years later.)

Symons’ next assignment took him back to familiar territory, the Northwest. Based in Portland, he was given charge of developing river and harbor facilities in Idaho, Montana, Oregon, and Washington. He did primary engineering work on canals, including one in Seattle that remains a principal feature of the city, and planned the tideland areas for Ballard, Seattle, and Tacoma harbors. Seattle’s present railroad lines and manufacturing district were included in planning for the famed harbor facilities.

On the Pacific coast, Thomas’ work on the world-renowned jetty works at the mouth of the Columbia River was featured in Scientific American magazine. He also provided the War Department with surveys and estimates for harbor construction at Everett, Washington.

Next week: Even bigger and better things, including historic work in New York State.

Photos: Thomas Williams Symons, engineer– Modern version of the Symons Block in Spokane, Washington.Lawrence Gooley has authored 11 books and more than 100 articles on the North Country’s past. He and his partner, Jill McKee, founded Bloated Toe Enterprises in 2004. Expanding their services in 2008, they have produced 24 titles to date, and are now offering web design. For information on book publishing, visit Bloated Toe Publishing.