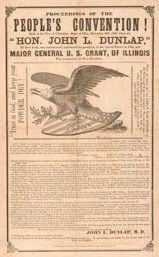 Eccentrics—they’re part of virtually every community, and, in fact, are usually the people we remember best. The definition of eccentric—behavior that is odd, or non-customary—certainly fit Watertown’s John L. Dunlap.

Historians noted his “peculiar kinks of mind,” and referred to him as “a person of comic interest,” but they knew little of the man before he reached the age of 50. His peculiarities overshadowed an entertaining life filled with plenty of substance. And he just may have been pulling the wool over everyone’s eyes.

Dunlap’s story began more than 200 years ago, rooted in the American Revolution. In 1774, his father (John) and grandfather emigrated from Scotland to Washington County, N.Y. In 1777–78 they fought in the War of Independence and saw plenty of action. According to a payroll attachment from his regiment, Dunlap served at Ticonderoga. Years later, he became a Presbyterian pastor in Cambridge, New York, and in 1791 married Catherine Courtenius. It took time for the reverend to see the light about the rights of man—records indicate that he freed Nell, his slave, in September 1814, not long after several of his parishioners had liberated their own slaves.Among the children born to John and Catherine Dunlap was John L., who arrived in the late 1790s. He was reared on stories of his dad and grand-dad battling for America’s freedom. While his father ministered to the spiritual needs of several Washington County communities for many decades, John L. became a doctor in 1826 and likewise tended to their physical needs for more than 20 years, serving in Cambridge, Salem, and Shushan.Dunlap focused on two passions in life: his line of self-developed remedies for all sorts of illnesses, and a consuming interest in politics on both the state and national level.  He pursued both with great vigor and developed a reputation as an orator in the Albany-Troy area.On July 4, 1848, John delivered a stirring oration at the courthouse in Troy, an event so popular that reportedly “thousands were unable to find admission.” Repeat performances were so in demand that for the next two years he gave the same speech in Troy, Utica, and elsewhere, at the same time marketing and selling his various medicines. Dunlap’s Syrup was claimed to cure Consumption, Dyspepsia, Scrofula, Liver Complaints, and other ills.Just as his father had left Washington County decades earlier to help establish churches in several central New York towns, Dunlap took his speech on the road to Schenectady, Utica, and other locales. Crowds gathered to hear his famous lecture and purchase his line of medicines.He had sought public office in the past, but his increasingly high profile and passion for politics presented new opportunities. At the 1850 state Democratic Convention in Syracuse, Dunlap’s name was among those submitted as the party candidate for governor. Horatio Seymour eventually won the nomination.Shortly after, Dunlap settled in Watertown and announced his Independent candidacy as a Jefferson County representative. He was as outspoken as always—some viewed him as eccentric, while others saw in him a free thinker. Fearless in taking a stand, he called for the annexation of Cuba and Canada, and was a proponent of women’s rights.Viewed from more recent times, those stances might sound a little off-the-wall, but there was actually nothing eccentric about the annexation issues. The Cuban idea was a prominent topic in 1850, and the annexation of Canada was based in America’s Articles of Confederation, which contained a specific clause allowing Canada to join the United States. And as far as women’s rights are concerned, he proved to be a man far ahead of his time.

In late 1851, Dunlap went on a speaking tour, including stops in Syracuse and Rochester, and announced his candidacy for President. The Syracuse Star said, “We suspect he is just as fit a man for president as Zachary Taylor was.”From that point on, Dunlap was a perennial candidate for office, always running but never winning. In 1855–56, he announced for the US Senate- not gaining the nomination, he announced for the Presidency (he was promoted as the “Second Old Hickory of America”)- and not winning that nomination, he announced for the governorship of New York. And he did all of that within a 12-month span.All the while, Dunlap continued selling his medicines and seeing patients in his office at Watertown’s Hungerford Block. An 1856 advertisement noted: “His justly celebrated Cough and Lung Syrup, to cure asthma and bleeding of the lungs, surpasses all the preparations now in use in the United States.”Another of his concoctions was advertised in verse:“Let me advise you ’ere it be too late,And the grim foe, Consumption, seals your fate,To get that remedy most sure and calm, A bottle of Dr. Dunlap’s Healing Balm.”His vegetable compounds were claimed as cures for dozens of ailments ranging from general weakness to eruptions of the skin to heart palpitations. There was no restraint in his advertisements, one of which placed him in particularly high company.It read: “Christopher Columbus was raised up to discover a new world. Cleopatra, Queen of Egypt, captivated by her charms two Roman Generals, Julius Caesar, and Marc Antony. Napoleon Bonaparte was raised up to conquer nearly all of Europe and put down the Inquisition in Spain. George Washington was raised up to be the deliverer of his country. Dr. John L. Dunlap of Watertown, N.Y. was raised up to make great and important discoveries in medicine, and to alleviate the sufferings and prolong the lives of thousands of human beings.”Next week: Part 2?Dunlap gains a national reputation.Photo: Official handbill of the People’s Convention promoting the candidacy of Dunlap and Grant (1864).Lawrence Gooley has authored eleven books and dozens of articles on the North Country’s past. He and his partner, Jill McKee, founded Bloated Toe Enterprises in 2004. Expanding their services in 2008, they have produced 23 titles to date, and are now offering web design. For information on book publishing, visit Bloated Toe Publishing.