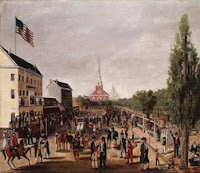 What follows is a description of the Richmond County Celebration of Independence from The Columbian newspaper in 1812:

In the very interesting situation of our country, it was expected that 4th of July, the 36th anniversary of our Independence, would be celebrated in a masterly manner. We are highly gratified to say, that the public expectation was not disappointed. We have never witnessed greater order, harmony, sobriety, patriotism, and becoming zeal.

The concourse of people was great, not only from the different quarters of the island, but also from the neighboring places. Republicans and federalist seemed to forget their party differences, and like brothers, rallied round the common cause of liberty and the rights and laws of our country&#8230-where, after being further entertained with the firing of national salutes and feu de joies, singing, &c. the company sat down at their respective tables, richly and plentifully furnished, and drank the following toast, with the firing of guns:

2. The armies that achieved our Independence-Our thanks and our honors are an “offering meet.” 6 cheers.

3 Bunker-Hill &#8211 Where the world was convinced that the lovers of Liberty dared to fight British veteran troops 3 cheers.

4 Saratoga &#8211 Where Burgoyne and high-toned royalist were convinced, that republicans could conquer. 3 cheers.

5 Yorktown &#8211 Where the thunder of our republican ordnance compelled the haughty Cornwallis to cry Enough! and made his impious head hide low in his cave of sand! 6 cheers.

6 The Constitution of the United States of America &#8211 the bond of our union, and grand charter of our rights &#8211 May it stand coeval with time. 17 cheers.

7 The Senate and House of Representatives in Congress assembled &#8211 We will stand by our country and obey her laws 12 cheers.

8 The President of the United States &#8211 at this eventful crisis, may Prudence be his advanced guard, and Determination his rear. 6 cheers.

9 The memory of George Clinton, late Vice President &#8211 The able defender of Liberty, and the people’s confident friend (Drank standing.)

10 The memory of George Washington &#8211 the illustrious Commander in Chief of the armies of America (Drank standing.)

11 The sentiments of Washington &#8211 perpetual union of the states &#8211 Our safeguard in war, as well as security in peace, and pledge of increasing glory. 9 cheers.

12 Confusion to the councils and plots of the enemies of our country &#8211 “We hold all nations enemies in war, in peace friends.” 6 cheers.

13 War with England &#8211 with France &#8211 and with the world- if peace cannot be enjoyed without paying tributes of subjection, losing our liberties, and our independence. 13 cheers.

14 The defence of our rights “with our lives, our fortunes, and our sacred honors” &#8211 The militia and soldiers of Freedom may be depended on. 17 cheers.

15 The memorable conduct of our gallant sons at Tripoli &#8211 It augurs well for the infant navy of our country. 9 cheers.

16 Our trusty and well-beloved Daniel D. Tompkins, and the important state of New York over which he presides &#8211 Second to none in the Union 9 cheers.

Image: The Tammany Society Celebrating the 4th of July, 1812 done in 1869 by William P. Chappel owned by the New York Historical Society

Sean Kelleher is the Historian for the Town of Saratoga