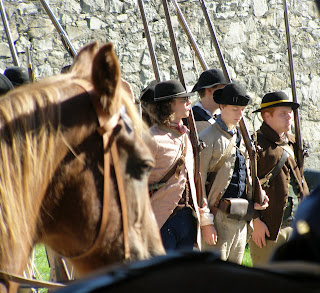 Fort Ticonderoga will hold a two-day battle re-enactment highlighting the climatic summer of 1777 as the Fort’s American garrison was outflanked by a British invasion force descending from Canada. The event takes place this Saturday and Sunday, July 21-22, 9:30 am to 5 pm.Highlighted programming featured throughout the weekend is planned to bring to life the surprising American retreat and British capture of Fort Ticonderoga in early July 1777.  American and British armies will maneuver across Fort Ticonderoga’s historic landscape at 1:30 pm each day. This two-day battle re-enactment will dramatically show how General Arthur St. Clair’s decision to evacuate Ticonderoga set the stage for British General John Burgoyne’s advance towards Albany.
“‘Defiance and Independence’ will take place on the actual ground where the events of early July 1777 took place,” said Stuart Lilie,Fort Ticonderoga’s Director of Interpretation. “British artillery officer, General William Phillips’, brilliant decision to place cannon atop Mount Defiance will be recreated in historic downtown Ticonderoga Saturday evening as Fort Ticonderoga staff and volunteers haul artillery up Montcalm and Defiance Streets on their way to the mount’s summit.” Sunday morning visitors and re-enactors will experience shock and chaos as General Phillips’ heavy guns break the dawn over Ticonderoga.

“Visitors will experience the excitement as mounted command staff gallop into the Fort announcing its imminent capture,” said Beth Hill, Fort Ticonderoga’s Executive Director. “They will be immersed in the moment when American Continental command staff assess their dire situation and debate whether or not to abandon America’s critical stronghold on Lake Champlain. Meanwhile in the British camp, visitors can explore General Burgoyne’s battle-hardened army of British, German, and Loyalist troops and discover the sights and sounds of an army on campaign as soldiers cook their rations, clean their muskets, and enjoy the humble comforts of a bed of straw and canvas tent.”

10 am: Inspection (British Army in the King’s Garden, Continental Army on the Fort’s Parade)

10:30 am -1 pm: British & American Guards and Pickets Posted (Along the Recreated French Lines)

Watch the scouts skirmishes that happened along the front lines, as advanced scouts of two armies worked to lift the fog of war that could cloud each general’s battle plan.

11 am: Mapping Ticonderoga, Surveying the Northern Army (Inside Fort Ticonderoga)

11:30 am: Artillery Demonstration (Adjacent to the British Camp)

With a few quick shots in an expected place along the front lines messages rush back to the headquarters of each Army. Staff officers and generals alike take this message from the front lines and a slew of others to make a decision. Alarm! The orders go out- soldiers assemble and are inspected before marching off to their place in the battle line.

Watch as General Burgoyne’s advanced guard of soldiers probe the American Fortifications rebuilt from the famous French Lines of 1758. Unlikely to assault these Fortifications, British soldiers keep up a hot fire as they probe around these lines, finding out where to flank them, and valuable information about the American soldiers facing them 100 yards away.

General Arthur St. Clair and the senior officers of his staff, discuss the British attack, their situation, and even evacuating Fort Ticonderoga, the great American bulwark to protect Albany and certain British victory.

Meet some of the average people and soldiers you would have met in the Armies of the Northern Campaign in 1777.

4 pm: Program: British Engineers Discuss and Demonstrate the Science of their Trade. (Inside the British Camp)

4:30 pm: Program: Sutlers for the Army &#8211 Phil Dunning explains the role of sutlers within the Continental and British Armies. (Inside the British Camp)

Discovered by an errant shot, General Burgoyne’s cannons atop Mount Defiance announce their presence to a baffled Continental Army.

10 am: Continental Musick Beats the “General”

General Arthur St. Clair prepares his Army for what he hopes will be an orderly retreat. American soldiers break camp. They prepare for what will at best be a fighting withdrawal, at worst a panicked retreat. Veterans and green soldiers alike ready themselves to live on the march.

10:30 am: Guards and Pickets Posted (Along the Recreated French Lines)

Watch the scouts skirmishes that happened along the front lines, as advanced scouts of two armies worked to lift the fog of war that could cloud each general’s battle plan.

11:00 am-12:00 pm: Program: Joel Anderson, Fort Ticonderoga Artificer Superviser, describes the flight of the Continental Army from the Fort.

Learn about the brave actions and misadventures of General Arthur St. Clair’s army as it began its retreat south from FortTiconderoga to fight another day.

11:30 am: Artillery Demonstration (Adjacent to the British Camp)

With a few quick shots in an expected place along the front lines messages rushes back to the headquarters of each Army. Staff officers and generals alike, take this information and a slough of others to make a decision. Alarm! The orders go out- soldiers assemble and are inspected before marching off to their place in the battle line.

Hemmed in from the north, east and west, the Continental Army holds their lines against the advances of the British army, emboldened by its advantageous position.

General Arthur St. Clair and his senior officers discuss their desperate situation and attempt to bring some order to what no doubt will be a rushed evacuation of the Army. With supplies to salvage, wounded to transport and a bridge across the lake to destroy behind them, these officers attempt to make the best preparations to fight another day.

See the Continental Army packing up tents, supplies, loading up their wagons to save what they can for what will be another long campaign.

Admission to “Defiance & Independence” is included with Fort Ticonderoga’s general admission ticket. A complete highlighted event schedule can be found online, or call 518-585-2821 for more information.