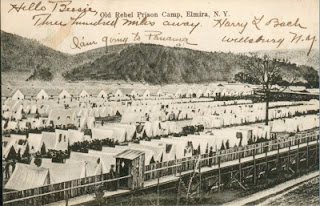 Michel Fortlouis, a young Confederate soldier, weary of war, was captured by Union troops at Clinton, Louisiana, thirty miles from his home of New Roads. It was August 1864, in the last year of the Civil War. Corporal Fortlouis was shipped north to the Union Prison Camp at Elmira, New York, where he died of pneumonia within ten days of his arrival. More than 12,000 young Southern men passed through the camp. Many suffered the harsh winter. Nearly 3,000 died.

In their Honor &#8211 Soldiers of the Confederacy &#8211 The Elmira Prison Camp (2009, New York History Review) remembers these men and boys, and tells their stories. Research by author Diane Janowski, who lives in Elmira, brings an  awareness of the soldiers’ relationships &#8211 brothers, fathers and sons, cousins and friends. Descendants of the soldiers have contributed harrowing stories of survival or despair. They were captured together. Some made it home.

&#8220This is a different kind of book about the Elmira Prison Camp,&#8221 Janowski says. &#8220Many writers and scholars in recent years have done a fine job researching and publishing information about the prison camp’s horrors. I decided to ask the families of some of the prisoners. With 21st century technology I found some families that were willing to talk about this difficult subject.&#8221

The book is not about war strategy, nor conditions inside the camp, the first 40 pages or so offers personal accounts of how the men and boys ended up in Elmira. The rest of In their Honor’s 218 pages  includes photos and diagrams of the camp and a complete revised list of the Confederate dead at Woodlawn National Cemetery.