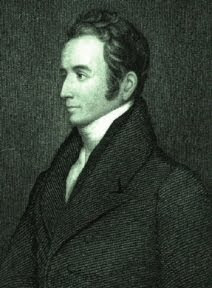 Thursday, April 21, marked the birthday of one of the most famous men you never heard of, and surely the least known of all North Country figures who once graced the world stage. It is also appropriate to recall his story at this time for two other reasons. It has ties to slavery and the Civil War as we mark the 150th anniversary of America’s darkest period. And, in relation to recent world news, it involves fighting for change in Africa.

If you’re well familiar with the work of Jehudi Ashmun, you’re in a very small minority. Even in his hometown, little has been done to mark his achievements other than a single roadside historical marker. And yet, if you look, you’ll find him in dozens of encyclopedias and reference books as an important part of African and Liberian history.

Jehudi Ashmun was born in Champlain, a small village in the northeastern corner of New York State, just a mile from the Canadian border. Early on, he proved capable of advanced learning, and after schooling in Champlain, he attended Middlebury College in Vermont at the age of 16, preparing for life as a Christian minister.

Ill health, a problem throughout his life, found Jehudi back home in Champlain during the War of 1812. On healthier days, despite his young age, he preached in the local church and organized a military company to protect the village from British attackers threatening from Canada.

After returning to schooling at Middlebury, he entered the University of Vermont. Graduating from UVM in August, 1816, Ashmun gave the salutatory address and presented “An English Oration upon the Philosophy of the Mind.”

Jehudi soon found employment as school principal and Professor of Classical Literature at the Maine Charity School, one of the first educational societies in the country. Guided by a strong Christian belief, he published extensively, including sermons, lectures, and essays.

Ashmun’s opinionated persona was not always well received, and six months after marrying Catherine Gray in October 1818, he resigned from the school and moved to Washington, D.C. There, he linked with the Episcopal Church for three years, studying religion, continuing to publish, and becoming alarmingly aware of the plight of slaves in nearby Virginia.

Christian doctrine deplored slavery, and the more Ashmun (a white northerner) learned, the more he felt compelled to act. He became an active participant in the American Colonization Society (ACS), a group that many supported with the best of intentions, but an organization that attracted a pro-slavery element as well.

To understand that dichotomy, it is necessary to at least somewhat grasp the situation in America around 1820. As a young nation proudly touting “all men are created equal,” the US was embarrassed by other countries pointing out in newspaper editorials the great hypocrisy of allowing slavery to exist for any reason within America’s borders.

By 1808, the importation of slaves had been strictly forbidden by federal law, but some southern states claimed the feds had overstepped their bounds. Still, a very powerful anti-slavery movement existed in America. The problem was—what constituted a solution?

Groups like the American Colonization Society faced an unusual number of arguments for and against their efforts. Many leaders, both black and white, believed all citizens should remain in the US and battle for full equal rights for all. Others, including many black leaders, felt that blacks would never be treated justly or be free of discrimination in America, and thus favored the establishment of a colony where they could flourish.

Some said that promoting colonization was simply a cover for the goal of ridding America of blacks. Others saw great promise in black colonists succeeding, and helping to spread the Christian faith across Africa. Many slave owners supported the society because they feared that freed blacks would urge those in slavery to rise together in rebellion. By sending them to colonies, the owners were removing rabble-rousers from their midst.

At the time, the idea of going to Africa did seem sensible to some blacks since that was their place of origin. However, by that time, many had been in America long enough to have children born here and had established roots. A great number preferred to stay in the US and face the devil they knew, rather than the uncertainties of life (the devil they didn’t know) in Africa.

At various times, plans were made for colonies in Canada, Mexico, Africa, the Caribbean, and in several Central American countries. Finally, a real effort to settle on Africa’s west coast was tried, but it failed. Another similar attempt was made within two years.

The second opportunity arose when the Georgia state legislature authorized its governor to sell about 40 slaves who had been brought to the state illegally. Money from the sale was destined for state coffers, but by law, before selling the slaves, the state had to allow anyone the opportunity to purchase freedom for the slaves or assume the expense of taking them to a colony.

In stepped the ACS, and it was 18 of those slaves who formed the bulk of the colonization effort in Africa. The leader of the expedition was Jehudi Ashmun, who avoided many debts by leaving the country, but whose devotion to the cause was beyond reproach. He also saw the opportunity to establish trade and perhaps find a way to pay his own financial commitments.

Throughout his life, Ashmun had been a deep thinker and an activist, but was frequently beset with periods of strong self-doubt. With that in mind, it’s hard to imagine his thoughts when, arriving on Africa’s west coast on August 9, 1822, he found wretched living conditions and violent conflicts involving several regional tribes.

Adjacent to the British colony of Sierra Leone, he gained permission to land and establish a community. He managed interactions and informal agreements with several local tribes, but it soon became clear that they intended to set upon Ashmun’s group and destroy them.

Jehudi’s settlers were suffering badly from illness, and were certainly in no condition to defend themselves. Their position on the peninsula of Cape Montserado provided at least some natural protection, but their sickness was disabling, and the meager rations they shared were barely enough to sustain life. The future looked bleak for this fledgling enterprise.

Ashmun himself seemed near death at times, but feared more for his wife, who was dreadfully ill. She finally succumbed on September 15, barely a month after their arrival from America. Jehudi was devastated. There was great doubt that he could survive and carry on the mission.

Next week?the conclusion: A battle for the ages &#8230- twice! and one of the greatest all-time underdog stories.