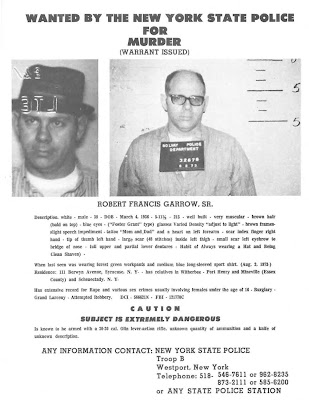 The next lecture in the Adirondack Museum’s 2012 Cabin Fever Sunday, &#8220Tracking Robert Garrow&#8221 with author and New York History contributor Lawrence Gooley, will be held on Sunday, April 15, 2012.

In the summer of 1973, serial killer Robert F. Garrow went on a murderous rampage that changed the Adirondack region forever. However, there was much more to Garrow’s story than the murders. From his unfortunate childhood to escapes from the law, the longest manhunt in Adirondack history, and his manipulation of legal, medical and corrections professionals, hear the full story of Garrow’s life from author Lawrence Gooley. Due to graphic content, this program is suitable for adult audiences.

Lawrence P. Gooley is a proponent of the North Country, a lover of books, and a history enthusiast. He operates Bloated Toe Enterprises, an internet-based business that currently includes Bloated Toe Publishing and The North Country Store. Gooley has also organized a North Country Authors group to help raise the profile of area authors and their works. Gooley’s writings have appeared in various magazines and newspapers. He has contributed to other works, including a recent piece in an annual book series, the Franklin County Review, and has provided editing services for several other titles. He has also authored nine books including Terror in the Adirondacks: The True Story of Serial Killer Robert F. Garrow.

This program will be held at the Adirondack Lakes Center for the Arts at Blue Mountain Lake, and will begin at 1:30 p.m. Cabin Fever Sundays are offered at no charge to museum members or children of elementary school age and younger. The fee for non-members is $5.00. For additional information, please call (518) 352-7311, ext. 128 or visit www.adirondackmuseum.org.