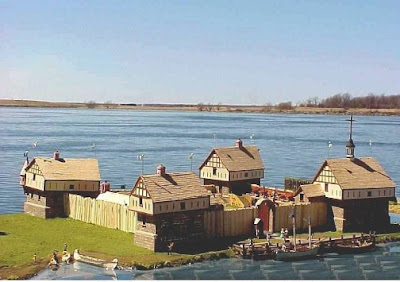 A new organization, Canadian Friends of Fort de La Presentation, is partnering with the Fort La Presentation Association in Ogdensburg, New York to advance the education of Canadians in general and students in particular in shared Canadian and American colonial history.

Through seven decades – 1749 to 1813 – encompassing the Seven Years War, the American Revolution and the War of 1812, Canadian and American history intertwined at the mouth of the Oswegatchie River in what is now Ogdensburg, New York.


“The Canadian Friends will develop educational programs and resources, undertake research to advance historical knowledge and widely share these assets through media, local projects and other services,” said Michael Whittaker, president of the Canadian Friends of Fort de La Presentation. “The forts which once stood on Ogdensburg’s Lighthouse Point, La Presentation from 1740 to 1759, Oswegatchie from 1760 to 1796 and Presentation until 1813, are rooted in Canadian history from the last years of New France through the first 50 years of British colonial rule.”

They are already working actively with the Fort La Presentation Association to plan the fourth annual War of 1812 Symposium in Ogdensburg April 27 and 28, 2012. The symposium, featuring four speakers from each country, will attract an audience drawn equally from Canada and the USA .

“We hope to fund the Canadian speakers at the War of 1812 symposium,” said Mr. Whittaker. “I live in Bishop’s Mills and know those of us on the Ontario side of the St. Lawrence River look forward to expanding our co-operation with our friends in New York .”

Two of the historians featured in the recent PBS production, “The War of 1812,” are giving seminars at the 2012 symposium. Four other historians who appeared in the production have presented at previous symposia.