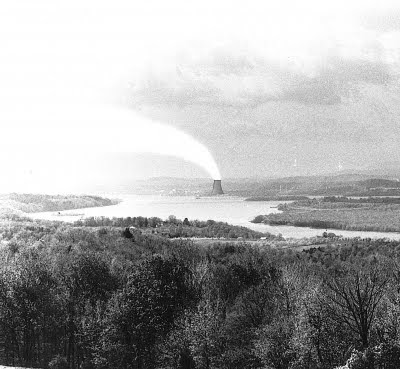 In 1979, a nuclear power plant was nearly built on the Hudson River in plain view of Olana State Historic Site. The Olana Partnership is presenting a panel discussion on Saturday, February 25, about this little-known incident in Hudson Valley history.

For the first time ever, three key players in this debate will unite and recount this game-changing episode, and how each played an important role. The panelists, Carl Petrich, J. Winthrop Aldrich, and Richard Benas, will discuss the unprecedented and nationally significant approach of considering the visual impact of a nuclear power plant in a region. Dorothy Heyl, a member of Olana’s Landscape/Viewshed Committee, will moderate.

In 1977, the Nuclear Regulatory Commission and the Power Authority of the State of New York held hearings on siting a nuclear power plant just south of Catskill in Cementon. The cooling tower, at a height of 450 feet, would have been visible for many miles. Thirty-five stories tall, it would have been 250 feet in diameter at its highest point and discharged a prominent plume. On some days, the plume would have obscured views of the Catskill Mountains from many locations, including Olana.

In the late 1970s, Carl Petrich, one of the panelists, worked as a landscape architect on the research staff of the U.S. Department of Energy’s Oak Ridge National Laboratory in Tennessee. Through an agreement with the Nuclear Regulatory Commission, Oak Ridge produced an Environmental Impact Statement for this project. Petrich immersed himself in Hudson River School history and the designed landscape of Frederic Church’s Olana. His conclusion—that the viewshed from Olana was of national importance and warranted protection—changed history. The resulting Environmental Impact Statement caused the Nuclear Regulatory Commission staff to recommended denial of a construction license for the proposed nuclear power plant. This was the first and only time that such a recommendation had been made on any grounds—let alone environmental or aesthetic.

J. Winthrop Aldrich, a Hudson Valley resident and long-time public servant, worked with counsel for local groups opposing the siting of the plant in Cementon. He was a proponent of assuring that the impact of the project on historic and scenic resources would be formally weighed in the decision making.

Testimony at the hearings on the significance of the Olana Viewshed included some by David Huntington, who had earlier led the successful preservation effort that saved Olana in 1967. More than 30 years ago, Huntington testified, “Olana is a monument and site whose significance will be increasingly appreciated by the American people.”

The three panelists, Petrich, Aldrich and Benas, will share their memories of a crucial, but mostly forgotten chapter in the preservation of a national historic landmark and its spectacular viewshed. “It’s surprising how few people know about this episode in this region,” noted Mark Prezorski, Landscape Curator for The Olana Partnership. “In some ways, it’s similar to the Storm King Mountain preservation effort, with far reaching effects.”

“This discussion, while it addresses the prospect of a nuclear power plant, is not about nuclear energy,” commented Sara Griffen, President of The Olana Partnership. “It is the story of how the importance of the Olana Viewshed factored into the siting of a plant, and how this mattered on a national and regional level.”

“Olana is famous for its breath-taking panoramic views that draw thousands of visitors to this magnificent historic site every year,” said Kimberly Flook, Site Manager of Olana Historic Site. “It was Frederic Church’s vision that actively shaped his landscape to frame the Hudson Valley’s unique natural beauty.”

The panel discussion will begin at 3:00 PM on Saturday, February 25 in Hudson, NY, at Stair Galleries (549 Warren Street). A suggested donation of $10 can be paid at the door, and admission is free for all members of The Olana Partnership. A reception will follow. More information is available online at olana.org or by phoning The Olana Partnership at 518.828.1872. RSVPs appreciated.