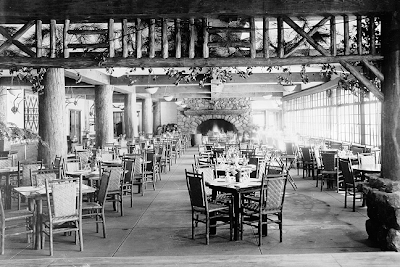 The historic Bear Mountain Inn at Bear Mountain State Park, which had been closed for renovations for over six years, will reopen its lodging facilities to the public this Saturday, February 18, 2012.

Originally built in 1915, the Inn has been extensively renovated to include 15 luxury guest rooms and suites designed by Thomas Hamilton and Associates, and over 20,000 square feet of flexible event space. Room rates will range from $189 to $450/night. The Inn also welcomes guests to the 1915 Cafe, which features a local and sustainable menu, and the Bear Mountain Trading Company, where visitors can find park souvenirs, crafts, local food items, and jewelry.

Bear Mountain Inn is an historic landmark, listed on the National and New York State Registers of Historic Places. Upon its opening, The American Architect declared the Bear Mountain Inn to be one of the &#8220finest examples of rustic Adirondack architecture in America.&#8221 Park employees constructed the Inn using natural materials, including stone and wood found in the park. The Inn’s interior is outfitted in the rustic style with handcrafted chairs, sofas, tables, light fixtures, and other accessories to complement the building’s design and woodland setting.

Event catering is under the leadership of award-winning Executive Chef Michael Matarazzo. The Bear Mountain Inn is managed by Guest Services, Inc., of Virginia, a private hospitality company that has provided food, hotel, resort and leisure services since 1917.

More information about Bear Mountain Inn can be found online.