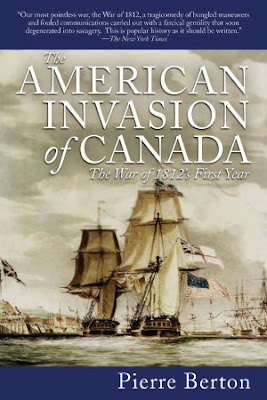 Although it has taken a backseat to the 150th Anniversary of the Civil War and has been largely forgotten outside the areas it was fought, this year marks the Bicentennial of the War of 1812. In the reissued The American Invasion of Canada: The War of 1812’s First Year (Skyhorse Publishing, 2012), Pierre Berton transforms history into an engrossing narrative that reads like a fast-paced novel.

To America’s leaders in 1812, an invasion of Canada seemed to be “a mere matter of marching,” as Thomas Jefferson confidently predicted. How could a nation of eight million Americans fail to subdue a struggling British colony of 300,000 already enmeshed in a life and death struggle with the armies (and navies) of Napoleon?

Berton is deft at describing the mood of the nation at the outbreak of war, and lends a well-needed dose of Canadian perspective. The War of 1812, he says, was &#8220the war that Canada won, or to put it more precisely did not lose, by successfully repulsing the armies that tried to invade and conquer British North America. The war was fought almost entirely in Upper Canada, whose settlers, most of the Americans, did not not invite the war, did not care about the issues, and did not want to fight.&#8221

Drawing on primary sources such as memoirs, diaries, letters and official dispatches, Pierre Berton gets inside the characters of the men who fought the war, from common soldiers to generals, bureaucrats, profiteers, traitors, and loyalists. Burton is at his best when describing the lives and motives of individual soldiers and politicians, an effort he doesn’t accomplish as well for Native American warriors who were as much a part of the story of the War of 1812.

This shortcoming is perhaps understood, considering Berton’s relaince on primary written sources, few of which are Native American. And it is outweighed to some extent by the author’s broad inclusion of lesser battles, attacks and massacres in which Native Americans played the key role. Still, his &#8220Cast of Characters&#8221 list precious few Native American names: Tenskwatawa, &#8220The Prophet&#8221- Tecumseh, the Shawnee killed in the Battle of the Thames, in October 1813, who is considered one of Native America’s most important political leaders- the Wyandot Chief Roundhead- and the Mohawk Chief John Brant, the son of Joseph Brant (Thayendanegea) who was instrumental in stopping an American attack at the Battle of Queenston Heights in October 1812. Overall however, this book is a fascinating popular history of a complex war from an outstanding historian- the first of two volumes. His second work in the series, Flames Across the Border, picks up where this account ends.

Pierre Berton was an internationally renowned bestselling author of fifty books including Vinny, Klondike, and The Last Spike, and the recipient of over thirty literary awards including three Governor General’s Awards for Creative Non-Fiction. He was raised in Yukon (he was Chancellor of Yukon College), served almost four years in the army, was an editor at the Toronto Star, and a writer and host of CBC programs (and a member of the Newsman’s Hall of Fame).

One thought on “Americas Invasion of Canada: The War of 1812”