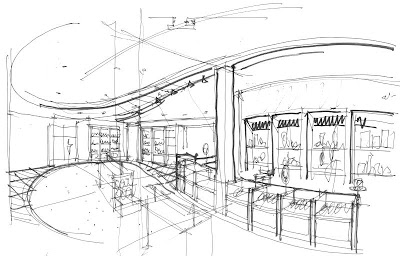 A completely new, significantly larger Brooklyn Museum Gift Shop, designed by the architectural firm Visbeen Associates, is opening Wednesday April 4, 2012 in space previously devoted to temporary exhibitions. At 4,150 square feet, the new shop is 1,600 square feet larger than the shop it replaces. The store is part of a multiphase transformation of much of the Museum’s first floor designed by Ennead Architects that has already resulted in an extensive renovation of the Museum’s historic Great Hall and the creation of a major new exhibition space.

&#8220The major goals of the new design for the first floor of the Museum have been to create a more coherent visitor experience, larger footprints for the Museum’s shop, restaurant, and exhibition galleries, and space to create a remarkable installation of major works from the Museum’s permanent collections,&#8221 comments Museum Director Arnold L. Lehman.

&#8220The design for the new Museum Shop has created a significantly enhanced shopping environment for our visitors along with an exciting new approach to merchandising. The shop will offer a fresh selection of unique items related to the world cultures represented in the Museum’s rich permanent collection. An important feature will be products from both established as well as emerging Brooklyn designers and artisans,&#8221 states Vice Director of Merchandising Sallie Stutz.

The newly created store will be organized around an arc shape that will be reflected in a curved jewelry counter in the center that forms the focal point of the space and will be echoed in a coffered ceiling containing recessed lighting. Two light fixtures, created by Brooklyn artist David Weeks, will be focal points of the design. The shop will feature 225 linear feet of lightly stained oak casework with metal fittings, with additional free standing fixtures in which merchandise will be displayed.

The new space, along the east side of the front facade of the building, was originally built in 1904 and is one of the oldest sections in the nearly 600,000-square-foot landmark building designed by McKim, Mead, & White. A wider entrance to the shop from the Lobby will provide greater visual access to the Great Hall, assisting circulation, and a rear entrance will connect it to planned temporary exhibition galleries.

One of the first in a museum in the United States, the Brooklyn Museum Shop began in 1935 as a sales desk offering publications, postcards, and photographs of objects in the Museum’s collections. In 1954 it evolved into a Gallery Shop that specialized in toys and original folk art and crafts from around the world, as well as objects related to special exhibitions. In 1963-64, the Museum Shop produced the first shopping bag created by a museum, featuring a four-color graphic.

Following the April opening of the Museum Shop, the next phase of the first-floor transformation, scheduled for completion in late summer of 2012, will include a new Museum restaurant and cafe, a bar, and an outdoor dining terrace, all planned to be opened for lunch and dinner. The dining room will also accommodate special functions. Casual dining areas will overlook the Steinberg Family Sculpture Garden. There will be direct access to the various dining areas and bar from the Museum’s 350-car parking lot.

The final phase of the first-floor renovation will transform space that has been occupied by the current Museum Cafe into special exhibition galleries that will add 50 percent more floor space to the previous temporary exhibition gallery, the Robert E. Blum Gallery.

The first-floor renovation continues a major redesign of the Museum’s ground level that began in 2004 with the opening of the Martha A. and Robert S. Rubin Pavilion, the Ennead-designed and critically acclaimed front entrance, as well as the renovated lobby, newly created front plaza and South Entrance, and expanded parking facilities.

Major support for the Museum’s extensive first floor renovation project has been provided by the City of New York through the Department of Cultural Affairs and the City Council.

Support has also been provided by Martha A. and Robert S. Rubin, Arline and Norman M. Feinberg, and Lisa and Dick Cashin.