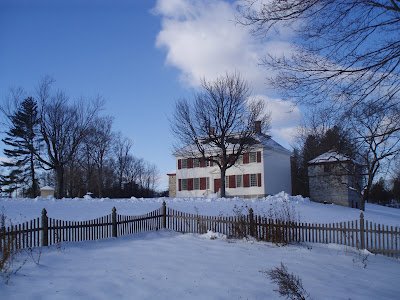 The goal of every museum and historic site is to make history come alive in the imagination of the public. The past few days have witnessed a number of celebrations of holiday greenery, music, and feasting, commemorating early festivities in the Mohawk Valley. Most of the greenery and more usual trappings of holiday spirit that are near and dear to our imaginations and hearts did not become common in household celebrations until the nineteenth century. More common in the 18th century secular celebrations were simple gifts of trinkets or money and feasts involving food and drink. There were additional rituals in colonial New York German and Dutch households where ceremonies were brought over from their countries of origin.
Samuel Kirkland, missionary to the Mohawks commented on the general celebration of the holiday season in the Mohawk Valley in 1769: “The manner in which people in these parts keep Christmas day in commemorating the Birth of the Saviour is very affecting and striking. They generally assemble for reading prayers, or Divine service—but after, they eat drink and make merry. They allow of no work or servile labour on that day and the following—their servants are free—but drinking swearing fighting and frolicking are not only allowed but seem to be essential to the joy of the day.”

Although there are no records of seasonal “fighting” or “swearing” in Sir William Johnson’s household, both festive and solemn celebrating were tied to the Masonic commemoration of St. John’s Day, taking place the day after St. Stephen’s day, generally after mid-December, often between Christmas Day and the new year. Numerous records note bowls of punch exchanged at Tice’s Tavern in Johnstown, after more somber celebrations among a gathering of Masonic brothers. On at least one occasion the gathering at the lodge in Johnson’s village of Johnstown was followed by a walk to Johnson Hall where hospitality abounded.

Only an occasional invitation or seasonal greeting from friends and neighbors survived in original Johnson correspondence, one example being a letter dated December 16, 1761, from William Corry, an Albany friend, who had invited Johnson to: &#8220Relieve yourself out of your Elizium, and come and spend some time among us. Christmas is a coming, and pretty good riding here, which will bring plenty of Turkeys to town. Let me request you to come and take share of them.&#8221

There are early descriptions of flocks of turkeys being driven into market, herded along and sold as soon as they arrived into a town or village. The assumption can be made that the reference to plenty of turkeys coming into town speaks to good roads during a season that often experienced fall and winter rain, snow, and complicated driving conditions for wagons and carriages. Additional greetings to the Johnson households reference Sir William’s son-in-law Guy and son John, alluding to their good nature and jovial hearts.

Enjoy the season- expand your imagination and support the numberous opportunites to celebrate the area’s history by attending special holiday events designed for the historic sites and museums in your neighborhood.