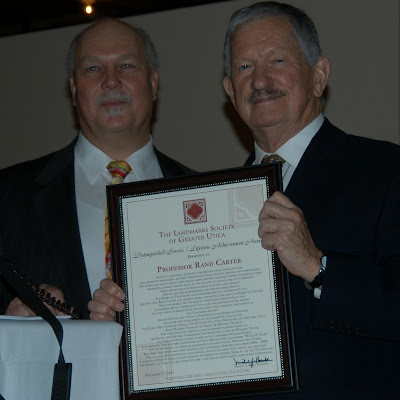 The Landmarks Society of Greater Utica has honored the recipients of its 2011 Awards of Merit at the society’s annual meeting November 17. A Lifetime Achievement/Distinguished Service Award was presented to Rand Carter, Professor of the History of Art, Hamilton College, for nearly two decades of dedication to the Landmarks Society and the area community in the preservation of historic properties.

The additional honorees are:

David and Regina Bonacci, 251-253 Bleecker St. In 2009, the Bonacci’s purchased a building which most recently contained Gerald’s Men Shop and which dates back to the mid 1800s. It had been on the “endangered buildings” list and was scheduled for demolition for parking in 2007. After extensive renovation, the building now serves as the Bonacci’s loft-style residence, and houses Bonacci Architects headquarters.

St. Joseph’s/St. Patrick’s Church, 702 Columbia St. Constructed in 1873 by German parishioners, the church merged with St. Patrick’s Church in 1968. The parish recently completed a privately funded, $2 million interior and exterior renovation which reflects its commitment to excellence and authenticity in the restoration of sacred spaces and historic buildings.

Manuel and Emmita Avila, l001 Miller St. The Avila’s purchased this stately Queen Anne Colonial Revival house which was on the city’s most endangered buildings list, and have undertaken significant restoration efforts to save it from further deterioration.

Tracy Mills, the The New Uptown Theatre, 2014 Genesee St. Mills purchased Utica’s only full-time movie theater in Utica in 2007. She has since completed the first phases of restoration to maintain the theater’s character-defining features, with plans for upcoming work on the marquee and stage. The theatre has become an anchor destination for the Uptown Entertainment District.

Orin and Kim Domenico, Domenico’s Cafe & The Other Side, 2011 Genesee St. The Domenico family has successfully partnered with their neighbors to create a vibrant and thriving coffee shop and venue for a host of community programs in the Uptown Entertainment District.

Stuart Bannatyne and Vincent Ficchi, Pier’s & Blake, 330 Main St. In 2007, Stuart Bannatyne purchased the Doyle Hardware building, constructed in 1881. hrough a substantial renovation program, the building has been returned to its original character. Thanks to Bannatyne and his business partner Vincent Ficchi, the building is now home of Pier’s & Blake, a cosmopolitan urban pub and gourmet steak house.