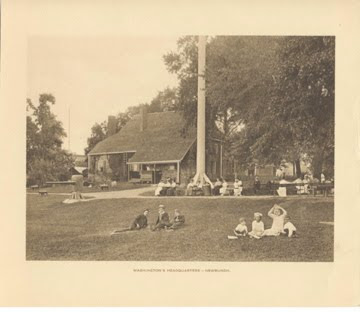 Each year, to honor Martha Washington herself, Washington’s Headquarters State Historic Site presents the “Martha Washington Woman Of History Award.” The recipient of the award must be a woman who has demonstrated similar characteristics while contributing towards the education and preservation of history in the Hudson Valley. The recipient will receive a place of honor on the plaque showing past recipients of this award, and an invitation to be part of the selection committee for future awardees. Along with this, she will be expected to attend “The General’s Lady,” a Woman’s History Month program, held each year in March, during which she will be acknowledged.

Any woman who has made a contribution to the history of the Hudson Valley through education, promotion, or preservation is eligible to be nominated for this award. The nominee’s service to the historic community shall be taken into consideration. The nominee can be someone who was involved in a project dealing with history and/or historic preservation. This individual must have been influential in some way, encouraging interest, enthusiasm and awareness of Hudson River Valley history even at its most basic, or grassroots level.

Nomination forms are available online. Completed forms will be reviewed by a selection committee including Washington’s Headquarters Staff, volunteers, and previous Woman of History Award recipients. Nominees will be notified within one month after the submission deadline.

Washington’s Headquarters State Historic Site, opened in 1850, is the first publicly owned historic site in the nation. The Commander-in-Chief, General George Washington, established Headquarters at Jonathan and Tryntje Hasbrouck’s fieldstone farmhouse from April 1, 1782 until August 19, 1783. This became the longest stay at any of his over 165 Headquarters during the 8? years of the Revolution.

While here, the General, his wife, officers, and his house servants lived and worked in close quarters, as a steady stream of guests came to meet with the Washingtons. During the critical months spent in Newburgh, Washington maintained a strong Army with eventual plans to disband it. He negotiated with contentious individuals in the Congress. Elsewhere, he dealt with problems of supply, training, pay and morale – all the things that affected his troops. He rejected a suggestion of an American monarchy, defused a potential mutiny among his officers, and proffered advice on the future of the new republic. In order to recognize the heroism of enlisted men, the Commander-in-Chief, at his Newburgh headquarters, created and awarded the Badge of Military Merit, the forerunner of the Purple Heart medal. On April 19, 1783, General Washington’s order for a “cessation of hostilities” was announced and he then dealt with the problems attendant to disbandment of the Army.

Martha Washington’s myriad traits, from big sister to business woman, were necessary attributes during her tenure at Headquarters Newburgh. For example, she travelled long distances every winter of the War to be with her husband and kept up communications with Mt. Vernon while supervising their immediate wartime household. Martha helped the Aides-de-camp with office work by copying letters and expense accounts. She was renowned for her pleasant demeanor even under the pressures of war and the need to hostess a constant crush of military and civilian personnel.