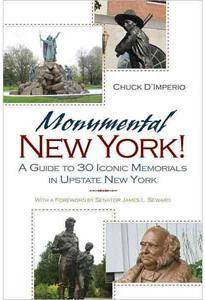 Monumental New York! A Guide to 30 Iconic Memorials in Upstate New York highlights some of the most fascinating statues and memorials found throughout Upstate New York. Author Chuck D’Imperio leads readers through the state’s rich history as he explores some of the famous and lesser-known monuments.

These monuments are scattered from cities such as Albany and Buffalo to the many little-known towns that populate the state such as North Elba, home of the John Brown Memorial. Each chapter offers detailed information on the history and significance of each monument as well as useful travel information about the area.

At over 200 pages, with 31 black and white illustrations and a map, D’Imperio’s narrative, research, and enthusiasm for Upstate New York makes Monumental New York! a intersting and useful guide to some of the state’s best memorials.

Chuck D’Imperio is a longtime radio broadcaster at Central New York Radio Group’s station WDOS in Oneonta. He is the author of several books including My Town Is a Cathedral, Upstate New York, and Great Graves of Upstate New York.

2 thoughts on “A New Guide to 30 Iconic Upstate Memorials”