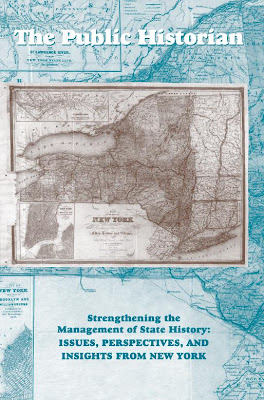 Anyone who follows this website, New York History: Historical News and Views From The Empire State, knows the close to astonishing amount of historical activity going on in our state. New York’s history, I believe, has more variety, interest, and potential for us to draw insights today, than the history of any other state. We have hundreds of historical programs and officially designated local historians. But we also know that the state of the historical enterprise is not as strong as it ought to be.

Too many programs are struggling with unclear missions, undefined audiences, and inadequate resources. There are several state programs in the history arena, but coordination among them is limited and there is little sense of common purpose in the state’s history community. The recession has made things worse by reducing funding and support, putting many programs at risk and forcing others out of business altogether.

In short, New York needs a policy for state and local history, stronger leadership, better use of existing resources, and expanded, imaginative advocacy to secure more resources. We need to take more advantage of social networking and other technologies. Young people going through New York’s public schools need much more extensive study of the history of their own state. The essential work of historical programs needs to be strengthened and elevated in other ways as well.

The latest issue of the journal Public Historian (vol. 33, no.3, August 2011), published by the National Council on Public History, explores these and other issues. The special issue is entitled Strengthening the Management of State History: Issues, Perspectives, and Insights from New York. I had the honor of editing this special issue and also contributing a couple of articles to it. The other writers are among the most distinguished and thoughtful historical program leaders in the state. The entire issue is provocative and analyzes both problems and opportunities. Perhaps most helpful of all, it provides suggestions for action to strengthen history programs.

The essays in the special issue are as follows:

Bruce W. Dearstyne, guest editor of this special issue, presents an introduction on the value and importance of state history and sets forth suggested strategies to strengthen the management of the historical enterprise in New York.

Carol Kammen, Tompkins County Historian, author and leader in the area of local history, provides a historical analysis of the development of historical societies and related organizations and offers recommendations for strengthening their work.

Garet D. Livermore, Vice President of Education at the New York State Historical Association, discusses the historical development of “the Cooperstown idea” and its evolution in the 21st century

Christine W. Ward, State Archivist and Assistant Commissioner for Archives and Records, in the State Archives, State Education Department, describes the Archives’ work with statewide documentation, an essential strategy to preserve the sources of history.

The special issue, like all issues of Public Historian, also includes some book and exhibit reviews.

Hopefully, it will lead to further discussion and action to strengthen the management of history in New York State.