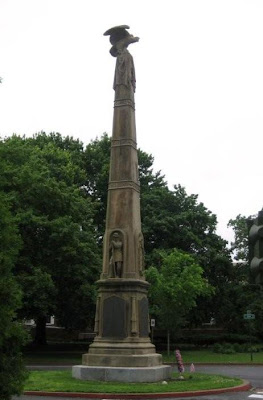 Understanding and appreciating the events of the Civil War will come alive the weekend of September 9-11 in North Creek (Johnsburg, Warren County, NY in the Adirondacks) as the Johnsburg Historical Society commemorates the 150th anniversary of the start of that war in 1861.

Saturday, September 10th at 7:30 pm and on Sunday, September 11th at 2:00 pm local author Glenn L. Pearsall will present “Johnsburg Goes to War: 1861-1865” in the auditorium of the Tannery Pond Community Center. During this special two hour “one man show” with extras, Glenn will share his two years worth of research on the 125 men from Johnsburg who went off to war.

Pearsall’s talk will feature over 100 historic photographs including some pictures of those men from Johnsburg and the places they fought as they look today. Re-enactors in uniform will read from the diaries and journals that Pearsall has discovered to give a real sense of what the war meant to small Adirondack hamlets like Johnsburg in 1861. His talk will cover army life in the 22nd, 93rd, 96th and 118th NY Regiments who recruited men from Warren, Washington, Clinton and Essex Counties here in the Adirondacks.

From August 26 to September 21st the Widlund Gallery of Tannery Pond Community Center in North Creek will feature a display of pictures of some of the men from Johnsburg who went off to war including historical photographs, period flags and a display on Mathew Brady, noted Civil War photographer born in Johnsburg.

On September 10 from 9 a.m. to 5 p.m. and on September 11 from 9 a.m. to 2 p.m. a dramatic living history re-enactment will take place at the town Ski Bowl on NYS Rt 28. (The re-enactors will not be open for business Friday). Several professional re-enactment groups will represent the lives of men in the 118th NY, the 123rd NY, 95th NY and 76th NY. The park’s ideal location offers spacious grounds, fresh water, restrooms, and ample parking.

Jim Hunt, contact for the re-enactors, indicates that “The camp setup will be a living history. All items used are authentic reproductions. We will camp in canvas tents, cook over an open fire and dress in period correct attire. We will converse with the public and answer questions about life 150 years ago. We will have display items for people to look at and touch. We will conduct ourselves in camp as they would have done. We will do firing demonstrations all day long so people can see and hear what a musket sounds like. The public will be able to hold the muskets but not fire them. We will conduct a military drill and manual of arms (probably at 1:00 p.m. Saturday and Sunday) and we will be having a Civil War wedding. This will be an actual wedding of two of our members. The camp will be open from 9:00 a.m. to 5:00 p.m. Saturday and 9:00 a.m. to 2:00 p.m. Sunday.”

For more information or to reserve a ticket for Glenn Pearsall’s program on either Saturday at 7:30 p.m. or Sunday at 2 p.m., call 518-251-5788 and leave a message. Tickets must be picked up by ten minutes before the programs. Adult tickets are $10 and children’s tickets are $6 for the benefit of the Johnsburg Historical Society. This entire Civil War commemoration is made possible by the Rivendell Foundation, Stewart’s Shops and friends of the Johnsburg Historical Society.

Photo: Monument to the War Dead of the Town of Queensbury, Warren County, New York. Located at the intersection of Glen, Bay and South Streets in Glens Falls, New York.