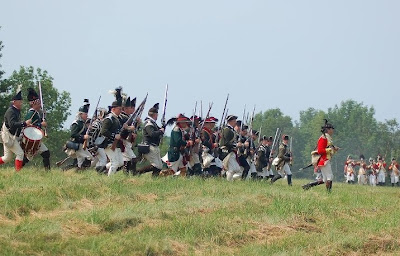 Vermont’s Hubbardton Battlefield State Historic Site will present a Battle of Hubbardton living history weekend on July 9 and 10 to honor the July 7, 1777, Revolutionary War battle, the only one fought in Vermont. More than 400 re-enactors will be on hand, making it one of the largest events at Hubbardton site in years.

During the Battle of Hubbardton soldiers from Vermont, Massachusetts, and New Hampshire fought in a decisive rear guard action to halt the British army and allow the main American army under Maj. Gen. Arthur St. Clair to withdraw southward to safety from Fort Ticonderoga and Mount Independence. Events at Hubbardton saved St. Clair’s troops and led to the American victory in October 1777 at the Battle of Saratoga, considered a turning point in the Revolutionary War and in world history.

The weekend offers activities for all ages and interests, including visiting the museum. Organizers expect a large contingent of re-enactors, who portray American, British, and German soldiers and their families. Vistor will be able to walk through their tent camps, see the tactical and artillery demonstrations, camp life activities, courts martial, learning how to drill, and guided camp and battlefield tours. Mistress Davenport will set up her popular school and storytelling. There will also be a children’s activity tent and many sutlers (the traveling shopkeepers of the time) will set up sutler row, with a colonial shopping experience for the public. Local groups will provide a food concession stand both days.

Saturday afternoon will include a military tactical on the slope of Monument Hill, weather permitting and the weekend highlight will be the battle on Sunday morning, with troops forming-up about 7:30 a.m. The extended tactical demonstration begins at 8 a.m. Around 9 a.m. the start of a symbolic Revolutionary relay across Vermont to Windsor’s Old Constitution House, will celebrate a 234th anniversary of Vermont’s Constitution. The modern relay will carry to the constitutional delegates in Windsor the news about the battle and withdrawal from Mt. Independence and Fort Ticonderoga.

The site opens at 9:30 a.m. on Saturday. Sunday’s events start about 7:30 a.m. Admission each day is $5 for adults and free for children under 15. There will be plenty of nearby parking and a “people mover” from the parking area to the central location for those who wish to ride. The event is offered by a partnership of the Vermont Division for Historic Preservation, Living History Association, and the Hubbardton Historical Society with support from many other Hubbardton organizations and area Scouts and businesses.

The Hubbardton Battlefield State Historic Site is located on Monument Hill Road 6 miles off VT Route 30 in Hubbardton or 7 miles off exit 5 on US Route 4 in Castleton. Carefully follow the signs. The site is regularly open Thursdays through Sundays and Monday holidays through Oct. 10 from 9:30 a.m. to 5 p.m. For more information about the Battlefield or this event, call 802- 273-2282.