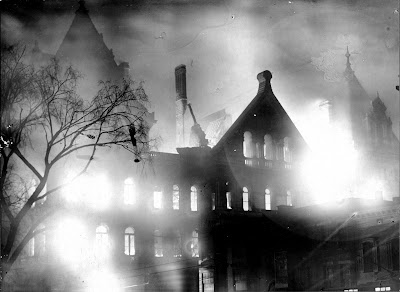 The 1911 Capitol Fire exhibit in lobby of Cultural Education Center has been extended through October 22, 2011. In the early morning hours of March 29, 1911, a fire broke out in the
northwest corner of the New York State Capitol. Many Albany residents awoke in the early morning hours to see the entire western side of the presumed fireproof building was engulfed in flames shooting 200 feet high. The fast-moving flames destroyed much of the State Library, the fifth largest in the U.S., which was housed in the Capitol.

The exhibition commemorates the 100th anniversary of the Capitol Fire through dramatic photographs, eyewitness accounts, and artifacts that survived the blaze.