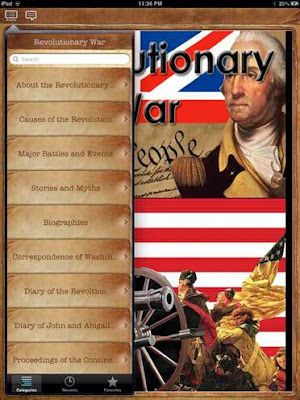 Revolutionary War is the latest release from Multi-Educator’s History on the Go series of mobile applications for iPad, iPhone and iTouch users. The program covers a variety of topics all accessible by touch menu screens.

Major battles and events of the War are covered with a short and lengthier text entries illustrated by drawings, paintings and maps. Most of the battles include multimedia presentations of the battle, several first-hand accounts, as well as reports about the battle by General Washington to the Continental Congress.

One section focuses on &#8220Famous Stories and Sayings of the Revolutionary War&#8221. Each of these stories and words- such “We have only begun to fight” includes both an illustrated text entry on the true events surrounding the story or quote, as well as a multimedia presentation on the event.

Other sections include: over 200 biographies of participants in the war and the signers of the Declaration- the complete text of the Journals of the Continental Congress that tell the story of the deliberation of the Congress as it struggled with the decision to declare independence- a diary of the Revolution- historic correspondence between John and Abigail Adams- details of the economy of America of the period- as well as a section identifying who were the Americans of that key generation. An updated release of the program to be released later this summer will include a section of simulation so student of all ages can remake historic decisions.

Revolutionary War contains over 100 high quality drawing and illustration (all of which you can zoom into), one hour of multimedia presentations, over 40 high quality maps- and dozens of first-hand accounts.

The app is available online at the Apple iTunes store for $4.99.