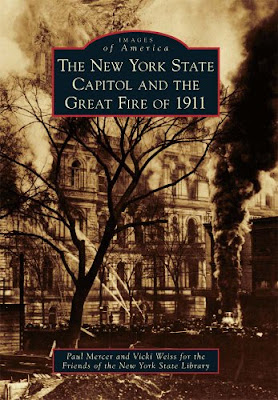 On Sunday, March 6, at 2:00 pm, the Albany Institute of History & Art will host a free lecture and book-signing by Paul Mercer and Vicki Weis, authors of the recently published book, The New York State Capitol and the Great Fire of 1911 (Arcadia Publishing, 2011). The lecture will complement a library case display at the Albany Institute of 10 historic photographs documenting the event, including the only known photo in existence of the full view of the building fully consumed by flames.

Weiss and Paul, of the New York State Library’s Manuscripts and Special Collections will discuss their pictorial history of the fire, which occurred on March 29, 1911. The book combines dramatic photographs with eyewitness accounts of the fire, which severely damaged the western portion of the capitol.

Virtually the entire collection of the State Library—as well as significant holdings of the New York State Museum—were destroyed in the blaze, which struck as the Education Department was mere months from relocating to the State Education Building across the street. The book tells not only the story of the fire and its aftermath, but also recounts the history of the construction of the capitol, as well as the pre- and post-fire history of the library.

The Albany Institute of History & Art’s library case display documenting the event includes a selection of 10 rare photos, showing both exterior and interior views taken during and after the actual fire. It also includes images of many of the firemen who responded to the blaze, The display opens on March 4 and closes in June. Viewing is free and open to the public.

The March 6 lecture and book-signing is free and open to the public. Museum admission is not included. Call (518) 463-4478 or visit www.albanyinstitute.org for more information.