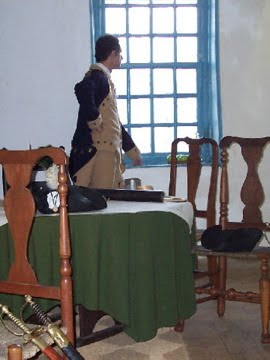 Washington’s Headquarters State Historic Site is celebrating George Washington’s birthday. To mark the occasion there will be three days of celebration, Saturday, February 19th through Monday, February 21st, 12:00 PM until 4:30 PM. Come by and wish General Washington a “Happy Birthday” on one – or all three – of those days. Admission to the three-day event is by donation.

Each day of the weekend celebration, actor John Koopman will portray General Washington while Thad MacGregor, an 18th and 19th Century musician, will perform in the Headquarters. Accompanying him will be his little wooden sidekick, Limber Jim, a favorite with children of all ages. Thad’s musical selections always add a party-like atmosphere to the occasion.

Sunday, February 20: the 5th Connecticut Regiment will provide military flair and color with demonstrations and discussions.

Monday, February 21: Lamb’s Artillery and Morgan’s Rifles will round out the weekend, firing off salutes to General Washington. After all, what’s a birthday party without some noisemakers?

Lectures and Activities:
Throughout the weekend, historical subjects of interest will be presented in the Museum.

Sunday, “Washington and The Circular Letter” and “Medicine During the Revolution” will be presented. A quill pen workshop will be provided and you’ll also be able to take home a personal silhouette.

The bookseller will be plying his wares, while the Museum Marketplace will have souvenirs and gifts for sale.

Washington’s Headquarters State Historic Site is a registered national historic landmark. It is located at the corner of Liberty and Washington Streets within the city of Newburgh’s East End Historic District. Call 845-562-1195 for further details or directions.