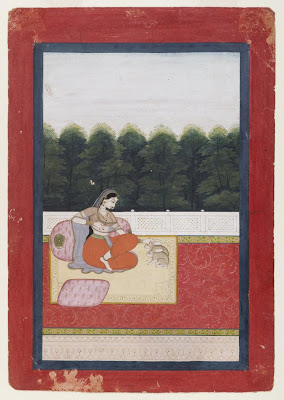 Split Second: Indian Paintings, a small installation of ten rarely seen works from the Brooklyn Museum collection, on view July 13 through December 31, 2011, will result from a unique online experiment that was inspired by Malcolm Gladwell’s critically acclaimed book Blink: The Power of Thinking Without Thinking.

The project is designed to explore how a viewer’s initial reaction to the work is affected by what they know, what they are asked, and what they have been told about the object in question. Just launched on the Museum website, the experiment consists of three steps.

The first phase consists of a timed trial. To gauge a person’s split-second reaction to a work of art, participants are given a four second countdown clock and asked to select which painting they prefer from a randomly generated pair of images from a pool of 167 works. Next, they are asked to write about a painting in their own words and then rate its appeal on a scale. In the final step, participants are asked to rate a work of art after being given unlimited time to view it alongside a typical interpretive text. Each part of the exercise aims to examine how a different type of information-or lack thereof-affects a viewer’s reaction to a work of art.

The resulting installation will include the Indian paintings that generated the most controversial and dynamic responses during the evaluation process. Each painting will be accompanied by an analysis of the data collected and a visualization of the data that explores the public’s response during the online evaluation.

The Brooklyn Museum collection of Indian paintings is considered among the finest in the United States. Rarely on public view because of their extreme sensitivity to light, Split Second: Indian Paintings provides a rare opportunity to view these seldom seen works of art.