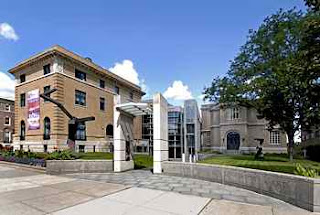 On Saturday, February 5, 2011, the Albany Institute of History & Art will open a new exhibition entitled &#8220Graphic Design-Get the Message!&#8221 The exhibition, which will run through June 5, 2011, replaces the historic exhibit, Hudson River Panorama: 400 Years of History, Art, and Culture, which was on display from February 2009 until January 2, 2011.

Graphic design, the carefully planned arrangement of visual images and printed text, can convey both meaning and message. As they tempt consumers, communicate political messages, and reflect social concerns, these boldly crafted, iconic images have been among mankind’s most effective forms of communication.

In the late 18th century the use of printed text and images to deliver messages and ideas proliferated as literacy rates began to rise, paper became more available, and printing technologies improved. The explosive use of advertising in the 19th and 20th centuries also stimulated the use of graphic design to convey messages. Manufacturers and merchants, buoyed by industrial and commercial growth, realized the need to advertise products in order to dominate an increasingly competitive marketplace. By the early 20th century, professionalization of the graphic designer resulted from growing demands for well-conceived, well-designed visual messages. No longer a static medium, graphic design in the 21st century has become a sophisticated means of communication, due in large part to the Internet, which has transformed texts and images through movement and interactivity. Technology once again has been a driving force for change.

&#8220Graphic Design—Get the Message!&#8221 looks at the field from four themed areas: typography and early printing- commerce and graphic design- political and social messages- and the creative process. Through the use of posters, broadsides, package designs, paintings, decorative arts, historical photographs, and computer interactives, these four themes will address topics such as technology and innovation- manufacturing and commercial growth- changing aesthetics- typography- designers and the growth of the design profession- and social and political expression in graphic work. Graphic designs, objects, and the history of design work from the Albany area will be used to address broader issues of national and international significance. As it examines technological, commercial, aesthetic, and social factors, Graphic Design—Get the Message! will reveal not only how the field has changed over the years, but also how it has changed us. Throughout its run, the exhibition will also feature a number of lectures and demonstrations by graphic designers and scholars in the field.

On Saturday, March 5, 2011, the Albany Institute of History & Art will open a separate, but complementary exhibition entitled, &#8220Hajo: An Artist’s Journey.&#8221 Hans-Joachim Richard Christoph (1903–1992), known familiarly as Hajo, lived through most of the 20th century and witnessed firsthand its high points and low moments. Born in Berlin, Germany, in 1903, he trained at the Reimann Schule following World War I, a time of artistic experiment and expression. When he immigrated to the United States in 1925, he brought training and skill that served him well as a graphic designer, first at the New York office of Lucien Bernhard and later at the Fort Orange Paper Company in Castleton, New York. Hajo created fresh, bold designs for Kenwood Mills, the Embossing Company, and other manufacturers, all meant to captivate and entice modern American consumers. In his spare time Hajo painted quiet landscapes that reflect the peaceful, small-town charms of the upper Hudson Valley. &#8220Hajo: An Artist’s Journey,&#8221 tells the story of an immigrant artist, his journey from Europe to the Hudson Valley, and his artistic explorations. Sketchbooks, drawings, paintings, graphic designs, and photographs span the breadth of Hajo’s world and the art he created to capture it.

Art and Nature: The Hudson River School Paintings
Through August 2011

The Albany Institute of History & Art has been collecting materials related to the Hudson River School artists for more than 150 years. The museum’s collection includes 60 paintings, sketchbooks, photographs, paint boxes, and manuscript materials related to all of the major artists associated with this movement, recognized as the first school of American painting. This exhibition includes 25 paintings and complements an additional 20 works in an adjacent gallery.

The Albany Institute of History & Art will highlight a number of its latest acquisitions in the museum’s Entry Gallery. Among the items to be displayed are two pieces of Chinese ceramics that Albany artist Walter Launt Palmer (1854–1932) depicted in his 1878 painting, Interior of the Learned House, 298 State Street, Albany. Curator’s Choice: Recent Acquisitions also includes a spectacular 12-piece silver serving set presented to Thomas Schuyler (1811–1866) in January 1859. The silver and related materials will be on view, along with a history of the towboat company started by Schuyler’s father, Captain Samuel Schuyler (1781–1842), who was one of Albany’s most successful businessmen of African heritage. The exhibit also features the archive of the Women’s Seal and Stamp Club of Albany, including a framed portrait the club’s logo, “Elm Tree Corner,” made entirely of clipped stamps and the painting, Crabapple (Fall), by Jeri Eisenberg of East Greenbush, New York, the Albany Institute Purchase Prize winner from the 2010 Artists of the Mohawk-Hudson Region competition.

The Hudson Valley and the art world lost one of their finest artists last fall when Bill Sullivan passed away at the age of 68. In addition to the Albany Institute of History & Art, Sullivan’s works are part of collections at the Metropolitan Museum of Art, the Museum of the City of New York, and the New York Public Library. His work has been displayed in countless group exhibitions. To honor Sullivan’s life and work, the museum will present five major canvases from its collection, including a recently promised painting from Albert B. Roberts entitled, View of Albany from Route 9J.