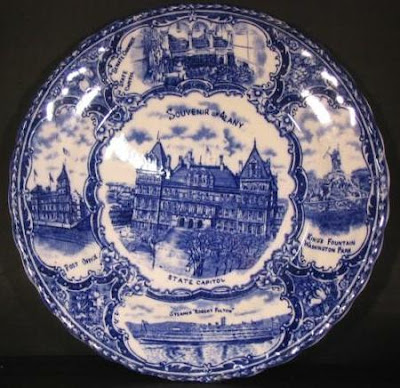 The Historical Society of the Town of Colonie will be hosting a program about commemorative Staffordshire plates featuring various scenes from 19th Century Albany, this Friday, December 3, 2010 at the Colonie Pruyn House (207 Old Niskayuna Road, Colonie).

Potters in the Staffordshire region of England used the transfer technique of printing on earthenware to distribute historical American views and commemorative pieces to the middle-class American market.

Deep blue transferware dominated in the 1820s but methodological improvements in printing occurred in the 1830s and 1840s which led to cleaner, sharper images, and a broader variety of colors. Because they were moderately priced, Staffordshire transfer earthenware was an affordable but attractive alternative to more expensive porcelains.

Following the lifting of embargoes in British goods after the War of 1812, Liverpool and Staffordshire potters resumed their high volume commerce with the United States. In the 1840s, earthenware from Staffordshire ranked fifth (behind textiles and metalwork) in importance among English export products. Among the products Staffordshire potters provided the American market was pottery that offered views of the America’s natural wonders and historic events that would appeal to a growing American civic pride.

For additional information about Friday’s program contact either the Pruyn House at 783-1435 or the Colonie Historian’s Office at 782-2593.

Photo: Albany, N.Y. souvenir nine inch plate manufactured in Staffordshire, England. An error in the transfer likely caused the word &#8216-Albany’ to be spelled &#8216-Alany’. Scenes on the plate include the state capitol, Washington Park’s King’s Fountain, the steamer Robert Fulton, the Post Office, and the NYS Senate Chamber.