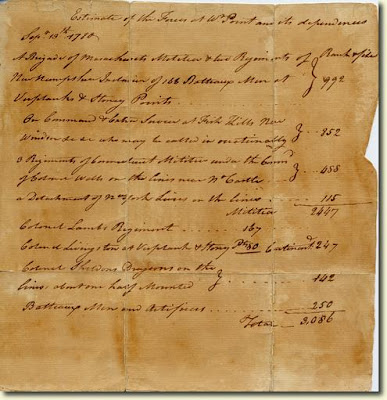 Governor David A. Paterson has announced that the &#8220Freedom’s Treasures&#8221 exhibit, a rare display of Revolutionary War-era and early nation period historical artifacts, including a handwritten draft of Washington’s Farewell Address, will be open to the public at the State Capitol’s ceremonial Red Room, from 10 AM to 4 PM on November 10-11.

The exhibition, entitled &#8220Freedom’s Treasures,&#8221 features a collection from the New York State Library, Archives and Museum of some of New York’s most important Revolutionary Era artifacts that have rarely been seen by the public. Featured in the exhibition is an original draft of George Washington’s Farewell Address penned in his hand that was sent to Alexander Hamilton for comment and revision on May 15, 1796. The document is part of the George Washington Collection at the New York State Library and was rescued from the fire that ravaged the State Capitol in 1911.

&#8220Freedom’s Treasures&#8221 also will give the public the chance to see a dress sword allegedly given to General Washington by Frederick the Great. The sword was purchased by the State of New York directly from Washington’s family in 1871 and is depicted in the Washington portrait that hangs in the United States House of Representatives. According to Washington family tradition, the sword was given to General Washington
with this verbal message from Frederick (the Great) II, King of Prussia: &#8220From the oldest general of the world to the greatest.&#8221

Among the other artifacts included in this exhibition are a portrait of New York State’s sixth Governor DeWitt Clinton and a writing desk he used. In office during two non-consecutive terms, Clinton was responsible for the building of the Erie Canal. The exhibit also includes the original engrossed copy of the U.S. Constitution sent to
New York State for ratification and the &#8220spy papers&#8221 retrieved from British Major John Andre’s boot that implicated American General Benedict Arnold in the West Point conspiracy.

The full list of exhibited items includes, Washington’s Farewell Address, Bronze bust of George Washington, Leaves from Washington’s copy of &#8220A Representation of the Cloathing of His Majesty’s Household and of all the Forces upon the Establishments
of Great Britain and Ireland&#8221 (the uniform book), Washington’s dress sword, Benedict Arnold / John Andre papers, A print of John Andre crossing the Hudson River (based upon his own drawing of the event), an engrossed copy of the original U.S. Constitution, a DeWitt Clinton portrait, and DeWitt Clinton’s writing desk and chair.

Reservations are NOT required on Thursday, November 11. Those interested in viewing the exhibit should enter the Capitol directly and follow the signs that will be posted. Visitors can gain access to the Capitol either from State Street or through the Empire Plaza Concourse.

For those who can’t see the items in person, a website has also been established.

Photo: An estimate of items at West Point one of several documents that were found in Major Andre’s boot when he was captured trying to get to West Point in 1780.