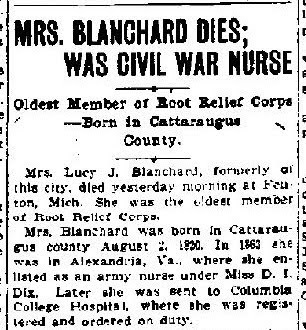 In 1911, Civil War nurse Lucy Blanchard died in Fenton, Michigan. Her remains were brought back to Syracuse and she was buried in Oakwood Cemetery. For ninety-nine years, her grave was unmarked and the memory of her service faded. Thanks to the efforts of Michigan historian Len Thomas, Lucy’s life story has been researched in depth. With the help of the Daughters of Union Veterans of the Civil War, a government headstone has been placed on Lucy’s grave.

On Saturday morning, November 13 at 11 o’clock, all are invited to pay tribute to this courageous lady, so long forgotten. For more information and a map to the gravesite, go to: